Just Ramblin, No 12: Vacation; Winning a Major While Tiger is in Rehab 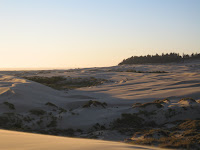 Vacation re-entry is really hard. Getting on the plane to head home, the sad reality of the vacation being over begins to settle. Then if you're cramped in the plane and the guy in front of you crashes his seat back into your lap, well, then you're just grumpy and you know the vacation is Over. Getting home is a little easier because you've acknowledged The End of the Vacation, but then you open the refrigerator, sigh, realize you must restock, and begin to unpack to begin loads of laundry. So really, why go on vacation? Ahh, because you look at your pictures and remember all the great things you saw and did and somehow the laundry and the grocery shopping isn't so horrible though you might still be pretty ticked with the guy who encroached so rudely on your limited economy seat space. But you'll get over it because you've got these great pictures and these great memories. Really. You will.
This morning I heard on the news that when sportscasters were interviewing Phil Mickelson and Vijay Singh at the PGA, but asking what it was like to be in this major and not have Tiger Woods on the course. That's got to be disheartening for any player. Now some guys named Jeev Milka Singh and Robert Karlsoon are leading the PGA Championship. Good for them. But I do wonder if anyone who wins a tournament between now and the time Tiger Woods returns, if he returns, will feel as though the win should have an asterisk: "Played while Tiger Woods was in knee surgery rehab." Probably not. A win is a win, but you know that some folks will wonder how different the outcome might have been had the Tiger been prowling the course.