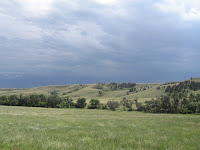 There are those who believe that there is nothing to see as you drive west on I-90 through southern Minnesota into South Dakota. Perhaps to some the miles and miles and miles of corn and soy might seem like "nothing," but there are moments of exceptions and there is something mesmerizing about those rows of corn. Homesteads. Some newer or at least well-kept; some quite old with barns leaning towards the earth as they slowly disintegrate. Windmills and windmill "farms." Bee hives, though I'm not quite sure why the hives are so close to road. It is, to me, miles of unwinding and peacefulness.
My friend and I called it a driving day on Saturday, July 18 when we got to Sioux Falls, SD though we got the last room in a Microtel because of a softball tournament and the Sioux Falls JazzFest. I would have stayed up to listen, but I was too tired. What is it about riding and driving, listening to and singing along with classic rock that can be so exhausting? Rhetorical question, of course.
On the road early on Sunday, July 19 as we headed to Mitchell, SD and the Corn Palace. L 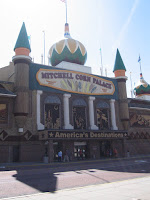 augh if you will, but it was quite fun. Each year there is a new theme for the Corn Palace; this year is America's Destinations. It takes about 275,000 ears of corn to decorate the Corn Palace each year and I can only imagine how many hours to tear down the remnant of the prior year's theme and begin to build the new year's theme. Then we were off to Wall Drug in Wall, SD. Wall Drug is unabashedly a tourist attraction with 76,000 square feet of tsotchkes though there are some real products. I did manage to resist buying a cane with a hidden sword. I've noticed that's not an item that can be purchased through the Wall Drug web site.
We decided not to wander through the Badlands on the way out, so we arrived at Hisega Lodge around 5P MT o 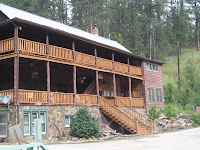 r so. The lodge is a wonderful place with a delightful history. It's well off Hwy 44 on a road that winds back into the hills. There's a creek that burbles under the road and near the lodge which simply adds to its charm and that peaceful, easy feeling. Carol and Kenn Duncan are marvelous and charming people. She's a fabulous cook who will give you more food than you can possibly eat but you won't want to stop eating what she's given you. And the coffee is very good; hot and ready at 7A. Kenn is a teacher, runner, drummer, road biker with a deliciously quirky sense of humor. The staff--Sheila, MJ, and Carrie--are lovely, friendly women.
At breakfast on Monday, July 20, we ate with Ron Hagen, another guest who was leaving that day. Ron is the founder and CEO of The Hagen Group and was back in the area for his 50th high school reunion 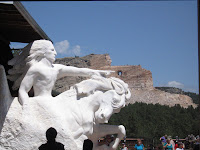 and he had some wonderful information and insight on what to see and do. So after we gorged ourselves on a fruit salad with yogurt, strawberry rhubarb cobbler, and an egg, chicken, and artichoke frittata, we waddled to gather our stuff so we could head out to explore.
We drove west and south to go to the Crazy Horse Memorial. It astonished me to learn the project started in 1946 with the selection of the location. The carving of this mountain is far from over! It's an extraordinary endeavor and well worth visiting as well as supporting. There is a museum and plenty of opportunity to get a sense of the history not only of the place, but Crazy Horse and his people as well as the sculptor, Korczak Ziolkowski, and his dream for this tremendous carving. The white sculpted replica that gives you an up close idea of what the carving will look like whenever it's completed is a m 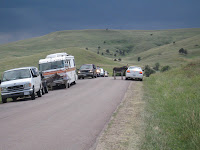 ere 1/34 of the actual size! After our visit at Crazy Horse, we went on into Custer State Park to take the wildlife loop from west to east. We saw antelope, elk, "wild" burros, prairie dogs, and buffalo. My favorite sign? "Do not approach any rattlesnakes." People have to be told that? Really? 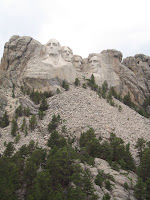 could take Iron Mountain Road from south to north heading up towards Keystone and Mount Rushmore. The reason is that there are tunnels along the road that are designed in such a way to give drivers great views of Mount Rushmore. The tunnels themselves are pretty cool, too. And then on to Mount Rushmore itself, which is truly impressive. There's a wonderful museum there along with the ubiquitous gift shop where you can get Mount Rushmore in varying sizes. We did the trek that allowed us to see the monument as closely as one might; there were some information signs along the route, but also a museum that offers more information about the project and the sculptor, Gutzon Borglum.
We decided to head north and west on Tuesday, July 21 to go to Devil's Tower. Devil’s T 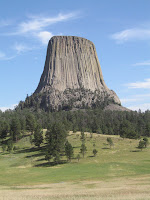 ower is a remarkable place and was America’s first monument. It was established as a national monument by President Theodore Roosevelt in 1906. There are several theories about the how and why of Devil’s Tower, but that didn’t really matter to me. I was there to enjoy the view. There is a nice hike around the base of the Tower and then another hike, Joyner Ridge, from which this photo was taken. There were a few climbers on the east face of the Tower the day we were there, which was cool to watch but not something I’d ever want to try.

Wednesday was a biking day and opted to trek part of the George Mickelson Trail. We rented bikes with fat nubby tires and weird suspension. Definitely not road bikes, but probably not full-fledge mountain bikes. We left from Hill City and rode up to the Mystic Trailhead. It was a gorgeous day for a ride. We did about 30 miles as an out and back. The first 8 miles had been a gradual uphill with a 4% grade, but that meant the last 8 miles were a lovely gradual downhill. That night we had dinner at a place on 385 called the Sugar Shack. It’s a very casual place (Bikers Welcome!) with great burgers. By far one of the best burgers I’ve ever had.

Thursday was a hiking day. We tried to do a hike near the lodge. Carol walked with us to point out the beginning of the trail and she tried to explain where to find the fire trails to get to what she described as amazing views, but we couldn’t find the trail start so we opted to go to one of the several trailheads we’d seen and go from there. We’re clearly not expeditioners because we had trouble figuring out which way was north. But it worked out well because we found a nice place to take a break before we headed back. Then we went to the Pactola Reservoir and found a place to put our feet in the water. It was cold and really relaxing. That night we went into town for the Rapid City Summer Nights event; it was a local band playing so it was basically a street party with two-steeping and some incredible fiddle playin'. It was a lot of fun.

Friday meant it was time to head home, which we did reluctantly. Megan and Brandon were leaving that morning as well. They had arrived on Monday as newlyweds; the lodge was a wedding present from Brandon’s mom. I thought that was kind of awkward, but they seemed delighted to be there. They are a sweet, young couple and a real pleasure to hang out with. 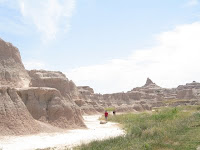 We finally got in the car and on the road by about 10A MT, but decided to go a bit south out of Rapid City to drive through the Badlands. We missed the road that would have taken us more directly through the Badlands, but what we saw on a rather warm day was enough for me. I have a much better understanding of why it’s called the Badlands: hot, stark, desolate. We did a quick 20-minute loop that gave us a bit of a closer view (and again saw the “Do not approach rattlesnakes!”) sign and that was plenty. Besides, I've seen hoodoos in Bryce Canyon and lighting across the canyons near Canyon Reef in Utah. THAT was awesome.

We made it as far as Albert Lea, MN on Friday. Had a bit of trouble finding a hotel room because Albert Lea was hosting the Bus Roadeo. I am absolutely serious about that. This is, apparently, a pretty big deal and sponsored or supported by the American Public Transportation Association. Who knew?

It was a great trip. Truly relaxing and enjoyable. I was totally exhausted by the time I got home, but happy to be so.