Egypt (and others) Emerging 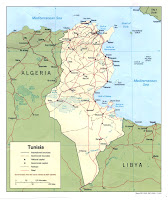 It started a month ago in Tunisia, the location of which more than a few of us probably had to look up.  But there in a small northern African country tucked between Libya and Algeria, a quiet revolution began.  On January 15, just a few days after the Jasmine Revolution began, Zine El Abidine Ben Ali, Tunisia's president for more than 23 years, and his family were safely in Saudi Arabia.

Today, The New York Times reports that overthrowing a government was the easy part.  Now comes the hard work of figuring out what to do next and how not to repeat the mistakes of others.  CNN reports that hundreds of Tunisians continue to flee to southern Italy.  Words like "flee" suggest people are leaving because they fear for their lives and/or their livelihoods.  Meanwhile, the government is in some turmoil, at the very least in disarray as it tries to respond to the needs and the will of the people.  It is easy to lose sight of the spark for this particular revolution, the self-immolation of Mohammed Bouazizi.  Mr. Bouazizi was a fruit vendor who was trying to make a living; he was told or ordered to leave wherever he had his cart and then slapped by that local official.  The slap was the last straw and he chose to set himself on fire to protest corruption and lack of jobs.  We cannot imagine the despair and humiliation that drove him to leave his family without a father and husband.

The Tunisian government has to eradicate corruption and somehow create jobs; no small tasks in the best of times.  Like the revolutionary climate of Charles Dickens' A Tale of Two Cities, it is both the worst and best of times for these passionate, angry revolutionaries.

And just as quickly, we learned of the people finding their voices in other parts of the Middle East, including the powerful unfolding drama in Egypt to which the world was witness.  In the States, we watched as the Obama administration gave its restrained support to the people and, behind closed doors, encouraged an embattled president to exit with dignity.  In the States, we listed to radio reports from Tahrir Square in Cairo as the crowds grew over 18 days of protests and rallies.  We learned how they organized themselves, how they created memorials for those who had been killed.  They did not fool themselves into thinking the revolution would be easy nor without bloodshed.  The people of Egypt supported the military because the military supported the people.  But now the people are not quite sure what they have wrought.  The military has dissolved parliament and suspended the constitution, and the people still remain in Tahrir Square.  It's as though they know the revolution is not yet over and that those who have come in to fill the vacuum much be watched very carefully.

Meanwhile, the people are restive in other parts of the world.  Potential revolutionaries and hardline rulers, dictators, and strongmen keep a wary eye on any development in their countries.  Actually, my guess is that governments and people everywhere, at least those with an interest in a stable Middle East, are keeping their eyes on what is happening in Egypt, Jordan, Yemen, Tunisia, and others.

It is certainly one thing to sit on the sidelines and second-guess the actions of the Obama administration, given that all we knew about the situation was what we might read in print and online, quite possibly forgetting there were likely all sorts of secret and encrypted phone calls and messages flying across the Atlantic at all hours of the days and nights.  Even still, because we are not with the crowds of people in Tahrir Square, we cannot know what is really going on.

If the reports are true, the people have not celebrated the end of the revolution.  Many of them seem unwilling to leave, recognizing the work of the revolution has just begun.  Mubarak came from the military and many of the military may be cut of the same cloth, may be well entrenched and comfortable, may not realize the depths of the frustration of the people.  The people remain in Tahrir Square peacefully, so far.  They know they want a democracy with free and uncorrupted elections; they know they want a civilian government.  They don't seem to quite know how to get there from here.

I can't help but wonder what might happen if some individuals started campaigning for president, right in Tahrir Square.  And what would happen if the people simply declared when there would be an election and the people, grassroots (dare I say?) community organizers just collaborated with like organizers throughout the country to hold elections.

No matter how Egypt continues to evolve and emerge from its decades of Mubarak's rule, I hope the people of Egypt are able to establish and sustain a democracy in name and in practice.  It will be something amazing and wonderful to witness.