Of fear and expectations 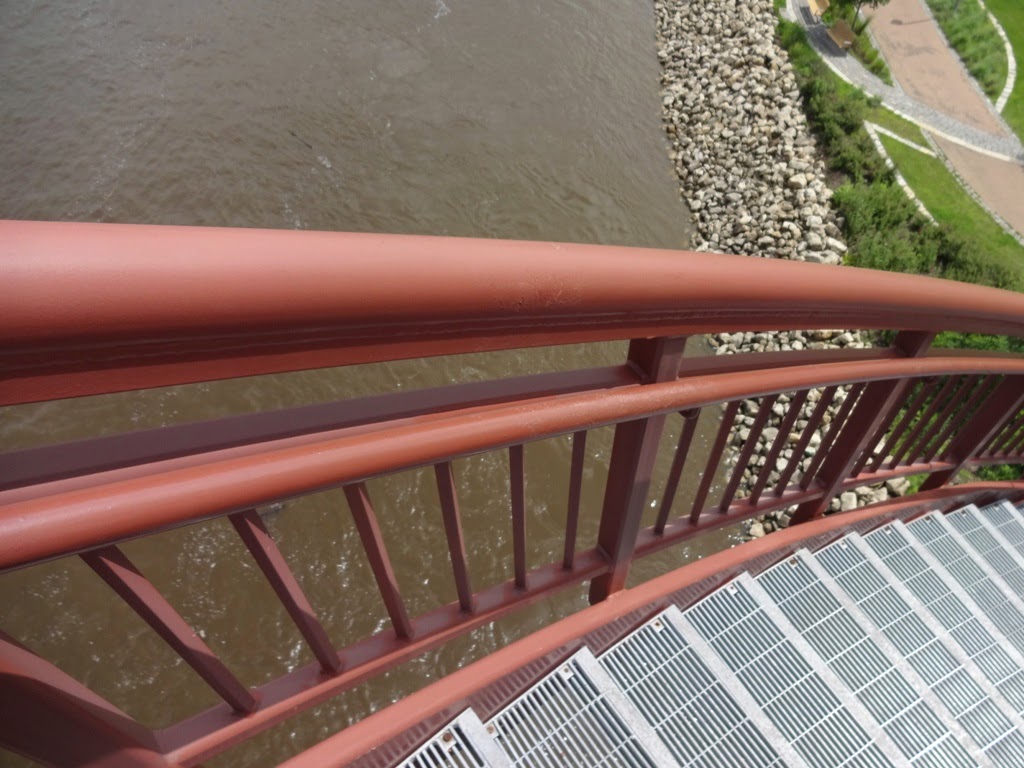 I'm afraid of falling down the stairs. It's not a completely unreasonable fear. I tend to be accident-prone. I am not the most graceful person you might meet; okay, I'm not really graceful at all, although I can fall well. That fact contributes to part of the nickname lovingly given to me by one of my friends: Joyce Grace. (The "Joyce" takes longer to explain and is really kind of an inside joke.)

What's amusing about my fear is that I live in a two-story house. With a basement. I might not have this fear if I weren't confronted with stairs every day, but I've long been concerned about escalators which are, after all, moving stairs. I'm one of those who does a bit of a stutter before placing my foot on the escalator with any degree of confidence, which is even worse when I've got a suitcase trailing behind me.

It's not the stairs so much as it is the falling. Falling hurts.

When I'm hiking and it's possible to get close to an edge to enjoy a view, I'm nowhere close to that edge. I'm not trying to grip the treeline that's farthest from the edge (think Richard Gere in Pretty Woman), but I'm not going to get too close to the edge. I'm not afraid of heights, but I am afraid of falling.

Just recently I went for a bike ride with a friend. It was on a bike path with a number of bridges because of the river; the Des Plaines River Trail for those of you in the Chicagoland area. At one point there is a bit of  blind curve followed by a slight incline followed by a bridge. I was in the wrong gear and so tried to power up the incline. Rear tire digging into the path + front tire hitting the metal framing piece between the path and the wooden bridge = me falling. I knew the instant it was going to happen and so I just let it happen. I've fallen a lot and it can be less painful to relax and let gravity have its way. I have a little abrasion on my elbow, a lovely bruise behind my left knee, and a spectacular bruise forming on the outside of my left thigh. And I bumped my head but I was wearing a helmet so there wasn't any damage to the bridge.

I know how much it can hurt to fall from short distances, so I can extrapolate how much it could hurt from heights. And falling down stairs is just asking for broken stuff, or worse. I watch TV and movies; I know what can happen. I speak only partially in jest. So I am cautious walking down stairs, especially the carpeted stairs or the narrow, steeper basement stairs, especially when I'm carrying something. Not neurotic cautious, but cautious.

The day after the bike ride incident, I dropped a plastic window fan on my foot. Left foot, of course. The edge of the fan landed on the joint of my big toe. I have a nice bruise there, of course. It made me laugh. Not because I'm masochistic, but because I was thinking I'm going to break myself bit by bit rather than one big fall down the stairs or a cliff or something else. Even so, I'm cautious.

For some reason--and even I don't try to explain the workings of my brain--that got me to thinking about expectations, but specifically "Expect the unexpected." I suppose that's what caution is all about: trying to forestall the unexpected.

There is such a thing as too much caution, too much anticipation of the unexpected that could leave us immobilized. That line of thinking got me to thinking about other fears: not doing well on a test or at a task; not being liked; not wearing the right thing; not doing the right thing; not being "successful;" disappointing someone. The list could go on and on, but so many of the things of which I could be afraid are things I project on myself. I've worn the wrong thing, done the wrong thing, and failed more than a few times. I'm sure I've disappointed people and I'm sure there are people who don't like me. I've not done well on tests and I've not done well on some tasks. It happens. Sometimes I've been embarrassed, sometimes I've been hurt.

I don't think my fear of falling down the stairs is (yet) unreasonable as I still go up and down the stairs like a reasonably normal person. But I'm a bit more cautious when I'm carrying something or when I'm in a hurry because I've skidded down those last two carpeted stairs a few times.

We can't avoid getting hurt. We can't avoid being embarrassed at some point in our lives. We cannot avoid hurt, disappointment, and a whole host of negative things. We're going to fall, sometimes literally and sometimes figuratively.

When I had my bike accident (and this wasn't my worse, by far), I sat on the ground for a few minutes and did an assessment, especially since my friend had seen me fall and that was probably worse than the fall itself. Elbow? I can move it, but that's going to bruise. Hip and thigh? Yep. I can move but there's going to be a big and colorful bruise there (I think I landed on my phone which, unlike me, was unhurt). Head? Might have a bit of a headache and should follow safety protocol and get a new helmet. Bike? Unharmed. Excellent because that would have been a major bummer. And so I got on my bike and finished the ride. (Then took some ibuprofen and iced stuff when I got home.)

Because that's what we need to do whenever we can. We can expect that there will be the unexpected, the stuff we never see coming. But that's all we can do because the permutations and combinations of the possibilities of the unexpected are mind-boggling. We know we are going to fall on occasion; sometimes literally and sometimes figuratively. When we do fall, we need to check for actual damage, take action to minimize the aftermath, and then we keep on keepin' on and expect that we'll try to continue to do nothing less than our best.