Rape is not funny 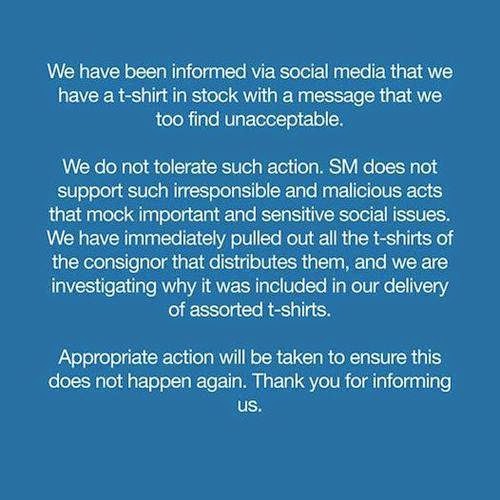 I dare you not to be angered, frustrated, and perplexed--all at the same time--after reading just the first line of this message.

The story behind this ludicrous "we didn't know this was a bad idea" statement is of a store that had to pull a T-shirt emblazoned with the words "It's not rape. It's a snuggle with a struggle." I'll give you a few minutes to get your blood pressure under control. Stop screaming at the screen. Seriously. The neighbors are getting nervous. But also seriously, you have good reason to be screaming.

I laughed out loud when I read the first sentence of the second paragraph: " We do not tolerate such action." The grammar snark in me noted that that particular sentence could easily refer to the preceding paragraph because that's the only "such action" so far referenced. So they do not tolerate being informed by social media that they'd demonstrated a colossal error in judgment?

And now to the second sentence of that same paragraph: "SM does not support such irresponsible and malicious acts. . . " and yet the T-shirt was unpacked from the shipment and no one--not a sales person not a manager--seemed to think it was a bad idea to put them out for purchase.

The inanity continues: ". . . we are investigating why it was included in our delivery of assorted t-shirts." The key word there is "assorted" because by that the store can claim they ordered an assortment of T-shirts and left it to the consignor to make the decision of what to send. Right.


What is even more alarming, revolting, and nauseating is that there seems to be a whole line of these kinds of T-shirts. That these kinds of shirts have been sold online through Amazon, and are still available through some online shops. [NOTE: The T-shirts referenced in this story are no longer available at the stores mentioned in the story.] [WARNING: Do not visit foulmouthshirts.com unless you are looking to be further alarmed, revolted, and nauseated.]


And so to the final statement. I offer it here with my own subtext: "Thank you for informing us. .  of our moral and offensive blunder, of our ineptitude in making good decisions about how we represent our cultural and social responsibilities, of how we represent what we think of women--our mothers, our sisters, and our daughters, of our inability to admit our mistakes and try to pass blame on some other apparently callously indifferent numskull."

I cannot help think of my post from yesterday and my contemplation of doing good for the world, trying to do something to repair the world. In spite of this, I KNOW there is good in the world.

I can't imagine what motivates anyone to create such content and to find it amusing or okay on any level. Simply banning it won't work, I know. But maybe trying to countermand it in some way can be effective.

Maybe simply trying to do effect positive change in our individual spheres of influence can matter more than we think or imagine.

Maybe we just have to keep trying to do good in the world, every day.

Maybe we have to encourage each other to do good in the world, every day.

Maybe by expressing outrage by such things rather than just shrugging and letting it be someone else's problem, we can take small steps to repair the world.