So just after the first of the year, in an attempt to be somewhat philosophical because I don't do the New Year's resolution thing, I wrote this.

And then, on January 4, I had to get on a plane to travel for business. January 4, in the Midwest and the Northeast, was a character-building travel day. After a relatively balmy December, the snow began falling. And kept falling, except where it wasn't quite cold enough to be snow in which case the precipitation was rain and freezing rain. And that means ice. Potentially ice under a layer of snow.

Now my flight out of Chicago could have been on time, which means that I would have made my connection in Newark, which means that I would have gotten to Montreal as planned. But nooooooo. My flight out of Chicago was delayed for nearly an hour as we waited for someone to get the load report to the pilot. The load report is important for taking off, figuring out fuel consumption, and, eventually, for landing. I get that it's needed. What I don't understand is why it took someone nearly an hour to get that report to the pilot who, I might add, sounded at least as exasperated as some of the passengers.

As those minutes ticked by, so did the chances of making my connection. But I knew my carrier, United, would rebook me on the next available flight. What I did not know was that travel drama was unfolding across the northeast because of weather.

I arrived in Newark suitably ignorant of the overall situation, but checking my United app nonetheless, looking for a rebooking. My connecting flight was delayed and if I could dash from C terminal to A terminal in 10 minutes or less. . . . well, if you've been in Newark, you know that's really hard to do. And I could not get to A terminal before the board changed to DEPARTED. Bother. And so, to the United Club where the people were not very gracious but soon thawed when I was polite--the weather is not their fault and someone else's incompetence or lack of responsibility or whatever in Chicago was also not their fault. I was booked on the next available flight and had a few hours to kill in Newark.

And that was fine because that meant I had time to review my content for my presentation which was good since I wasn't going to be getting to Montreal as early as I'd planned, so no worries. Then I got the first delay notification followed far too quickly by the second delay notification followed maybe an hour later by the cancellation notification. Back to the United Club counter and I was just ahead of the deluge of people on that same flight who were looking for rebooking. I overheard one woman comment on the hundreds of people in customer service lines at the desks and could only imagine the tension and the tempers.

I was booked standby on the last flight out of Newark for Montreal. I had another few hours to kill. By then, I was no longer interested in reviewing content further but I had plenty of other stuff I could do so I kept myself entertained and occupied for a while. I also texted my customer to let her know the fundamentals of this travel adventure and we figured out the options for our work on Monday, so that was one less thing about which to worry.

The time approached to leave the relative comfort of the United Club to go to Terminal A. As I boarded the bus, I got notification that the flight to Montreal was delayed. Now Terminal A is an old terminal in Newark. And it was crowded and hot. I do mean hot. Like this was only place at the Newark Airport getting all of the heat for the entire airport hot. Sweltering. And did I mention crowded?

The terminal restaurants were doing great business. Kids were making friends and creating games. Adults were being indulgent because the small people were laughing rather than crying and shrieking. It was fine. As fine as it can be as people are trying to wait patiently and watching the departure board with tired, hooded eyes hoping the time does not change yet again.

Then suddenly, the last flight from Newark to Montreal was boarding. Those of us on standby lingered anxiously by the agent's desk. The agent made the final call announcement three times. We counted down the number of people not yet on board against the number of people scurrying to get to the plane. (As an aside, it's easy to find the people who don't travel much because they don't realize the importance of staying near the gate in case that departure time gets moved up which, on rare occasions, it does and which was the situation for this Montreal flight).

Now we waited breathlessly to learn if we're going or staying. One clearly irritated woman, who was also one of a party of four or five, made some snarky remark about whether or not those who'd been waiting longest had any priority status. I winced. I know it doesn't work that way.

When I'd checked my app earlier, I was fourth on the list and held out the tiniest of hopes I'd make it. As the gate agents were consulting and squinting at their monitors, I checked the app again. I tried not to get too excited because the small crowd was getting restlessly impatient and I could feel the tension increasing. But when I checked my app, I'd moved up to second and there was a little green check next to my name which meant I was getting on the plane. Inside I was jumping up and down and shouting with joy.

At last the gate agent called my name. In my controlled haste, I still managed to smack someone with my backpack. She made a snide remark and I belatedly apologized even as I grabbed the boarding pass and headed for the jetway.

On board things were a bit chaotic as a few people were in the wrong seats. Small plane. Inexperienced fliers. A physical second row was actually the fourth row and people don't know where to look for the row numbers. Fine. The flight attendant got us seated. The young man who boarded behind me exhaled loudly in relief and said, "I've never been so happy to be on a plane." Hear, hear!

Then the pilot made an announcement about another delay because of backups in Montreal. The minutes ticked by. I napped.

Another announcement that we were going to push back and wait on the tarmac, get a little de-icing and hope to take off as soon as possible.

I napped again as we idled on the tarmac, and then I heard the engines rev and then we started to move. And then, at long last, a mere 11 hours after my scheduled departure, we were airborne. And all of this because one person didn't get one task done in a timely fashion.

I won't get into the challenges of customs, immigration, and car rental. At that point, anything else that happened was laughable due to exhaustion hysteria. But I got to my destination around 2A and managed to get some sleep. The trip home? A few challenges, but nothing to compared to the outbound trip. 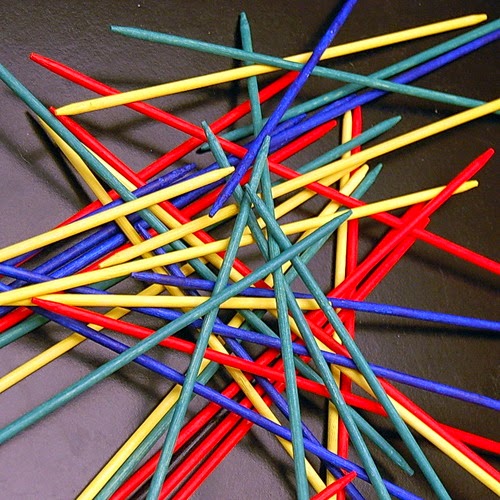 You've probably seen one of those amazing displays of the domino effect. Some of them very complex. You know that the each domino has to be placed carefully and at a precise distance from its neighbors for everything to work as planned. In real life, we can place as carefully as possible but we cannot plan for all of the possible choices and actions of others.

So my trip on January 4 was a powerful remind that plans are mostly guidelines and that it takes only one event, however small or seemingly mundane, to shatter the tidy domino effect one might have hoped for and make your day look and feel like pick-up sticks, a game of dexterity, coordination, and patience. . . some of the finer qualities in life.  And so it goes.