The "wretched refuse" coming to America: Some thoughts about immigration 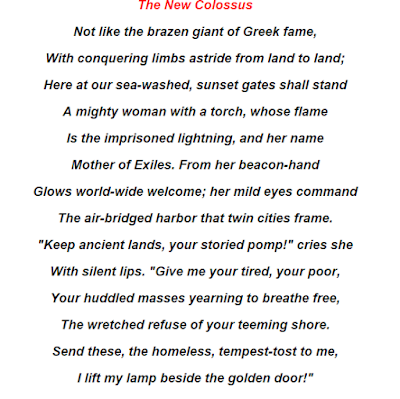 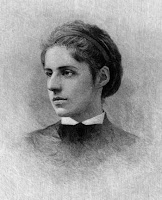 When I was a kid, granted that was a very long time ago, we had to learn this poem. We recited it. We talked about it, though we talked little about the woman who wrote it and why she wrote it. Emma Lazarus became a footnote to her own work. So I didn't know about her work with refugees, that she was of Portuguese Sephardic Jewish descent, and that really didn't matter. Even as a kid, these words resonated with me and spoke to what supposedly contributed to the greatness of America.

Paying occasional attention to my teachers, I vaguely remember learning about the founding of this country. As I grew older and became a better learner, I paid better attention to my professors but also read on my own. And most of us know that the United States of America was established and founded by immigrants.

Long before the "American Dream" became a thing, this country represented a place where hard work, ingenuity, and perseverance meant the possibility of a new and better life. So the tired, the poor, and the huddled masses came to America and yearned to breathe free.

Some came for freedom, some came to escape, some came for reasons we'll never know. But they seemed to know that setting foot on these shores meant the possibility of a new start.

I don't know why we're so surprised by the immigration issue, but I'm deeply disturbed by incomprehensible amount of ignorance. Setting aside Trump and his combative rhetoric to "get them the hell out of our country," and setting aside the other candidates' waffling bloviating on the topic of immigration, it would be wonderful if we could get objective facts about illegal immigrants and the impact of immigrants in this country. I'm not hopeful that's possible, but I'll start with Pew Research's five facts:


Now it's possible, even likely, those numbers have increased over the years. It's probable that many of the immigrants are criminals or have criminal pasts, but that's likely true of some of the people who come in the front door.

I know there are plenty of people who don't want the storm-tossed, the homeless, or the wretched refuse. But what we don't know is how many of those who struggle to come to this country do so because they can no longer be and do in their own countries. I've had taxi drivers who were engineers, doctors, and teachers in their own countries but don't have the money (yet) to get the certifications they follow their passions in this country, but they do what they do so their families will have a better life. I've had students whose parents came to this country precisely so their children could be educated in this country but who want to return to their home countries to give back so others don't have to flee to have a better life.

Perhaps I'm naive in thinking that many unauthorized immigrants often work more than job so their children can have a better life or to protect their loved ones from unimaginable harm and persecution in their own countries. I've no doubt some percentage of those who come here come to escape legal ramifications in their own country, but despicable people are born here, too.

I can't help but wonder what talent is among those unauthorized immigrants.

Perhaps it is romantic and ideal to claim that we are a nation of immigrants, but I know my mother's father was not born in this country and my father's grandfather was not born in this country. That makes me a generational immigrant. I know that PBS offers a course with one of its objectives being that students will be able to "[a]rticulate that the United States is a nation of immigrants, and that America's immigrant past is reflected in our language, culture, and traditions."

In 1980, The Jazz Singer popularized Neil Diamond's "Coming to America." In his lyrics Diamond states that some are never looking back, which is true, but I believe many continue to look back because they miss home and what it means to them. They come to this country to survive: because they have no other choice.

I know that many came to this country by force rather than by choice and we are foolish to ignore the impact slavery has had and has on this country.

I know that too often fear and ignorance inform people's impressions of the superiority of their race or their culture.

But I also believe that when we tap into that which is at root of the formation of this country, when we hear the echoes of those first immigrants and are reminded of the power of the possibility of freedom and choice, then we are not so surprised by the words of Emma Lazarus's poem, by the electrifying image of the Mother of Exiles: the Statue of Liberty.

There is so much that makes this country great and so much that tears at the greatness of this country. I think we have forgotten what made us great, though I'm sure we'd all disagree on what has made us great. I smile at that because I think that disagreement and the passion for our arguments is part of what makes us great, but that's another post.

In the end, I don't think there's an easy answer or solution for those who have come into the country without authorization. We know they come for various reasons and often because their own countries are imploding so whatever we choose to do is resolving the symptom and not the problems over which we have little or no control. But perhaps by changing some of our authorization systems we make it easier for immigrants to become more than what they were. Some will always yearn for home and perhaps becoming more than they were will give them the opportunity to return home to work to make a difference. Still others will choose to remain in this country and try to give back in whatever small and large ways they may know how. Perhaps some of us who were born here can learn what it means to be grateful for what we have. Perhaps.