The colliding ideas of "free" speech and tolerance 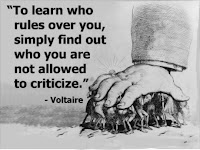 It's easy to be offensive these days just as it's easy to take offense.

I was thinking about this the other day when I saw or heard something that yet again prompted me to have an internal dialogue about the whatever it was. I'm deliberately vague because, unlike others, I'm reluctant to expose some of my thinking and opinions to the trolls and troglodytes who rise up with outrage when anyone says (or doesn't say) anything that in any way offends them. And then whoever has said or hasn't said whatever that has caused an avalanche of social media whatever-shaming offers up a statement of profound apology for saying or not saying whatever it was that caused the howling to begin. The apology has become a knee-jerk reaction to the vociferous clamoring of the unruly and offended.

But in these United States, that's what free speech is all about.

We have found ways to try to define hate speech, defamation, slander, and other forms of speech that our society deems as unjustifiable and outside of the confines of that which is free, as we should. I believe, however, that because we seem to have become a society of intolerant tolerance, it is harder and harder to have a conversation; it is increasingly more difficult to express an honest position or opinion without being carved up through social media because hears or reads a hint of something that potentially offends them.

A recent article encapsulated much of this recently: Freedom of Speech? Not at Brown University. While the words "safe" and "safety" were used only a few times in this article, that seemed to be the crux of the publishing matter. How to make sure everyone feels safe and how to make sure everyone feels included is nearly impossible. Actually, I'm certain it's impossible.

Author Emily Shire cites her colleague Lizzie Crocker whose article How a Gay Conservative and a Radical Feminist Were Banned from a College's Feminism Debate also challenges the increasingly dizzying rationale for promoting or not promoting certain opportunities for speech. Crocker notes Bindel's observation that "she was 'outvoted' in the end, but she felt she'd 'done my job' and helped to provoke an insightful discussion" (italics mine).

Crocker also asks who gives organizations such as student unions authority to determine what is "safe" and "unsafe." It was, after all, the student union that disinvited the speakers from the feminism debate and, if you haven't read the article, speakers who were already parlaying via Twitter and showing a great enthusiasm for the conversation and discussion they would be allowed to provoke. Crocker states "they claim to protect us from harm and violence, but too often they conflate offense with harm, and the fear of offending has become its own form of extremism."

In the 1990s we experienced an increasing rise in the use of the term "politically correct." The PC movement has its own history but I think its influences are still being felt today. We continue to struggle to navigate how to be inclusive, fair, reasonable, and somehow manage to offend no one.

Here's a painful reality check: we will never ever be utterly and absolutely inclusive, fair, reasonable, and inoffensive to all people all of the time. If that is to be the case, then complete silence must fall upon the entire world for the rest of time. No one can be permitted to say anything to anyone about anything. Extreme? Sure. Ridiculous. No doubt.

But as we worry about saying the wrong thing at the wrong time so we don't offend someone or so people don't think ill of us or so we don't provoke the "wrong" reactions, we are in danger of becoming a society in which no speech will be permitted, in which all speech is at risk of being censured because it made someone feel "unsafe."

Voltaire is widely misquoted as having said, "I disapprove of what you say, but I will defend to the death your right to say it." It's a good paraphrase of Voltaire's intent and pretty darned catchy. Some have suggested what Voltaire actually said in his Essays on Tolerance is "Think for yourselves and let others enjoy the privilege to do so too," but I can find no proof of that even though I really like that idea, too. However, because of the paraphrase and potential misquote, I got to read a good portion of Voltaire's Toleration and Other Essays [1755]. In "Whether Intolerance Is of Natural and Human Law," Voltaire writes--and please keep in mind the time in which he wrote:


Natural law is that indicated to men by nature. You have reared a child; he owes you respect as a father, gratitude as a benefactor. You have a right to the products of the soil that you have cultivated with your own hands. You have given or received a promise; it must be kept. Human law must in every case be based on natural law. All over the earth the great principle of both is: Do not unto others what you would that they do not unto you. Now, in virtue of this principle, one man cannot say to another: “Believe what I believe, and what thou canst not believe, or thou shalt perish.” Thus do men speak in Portugal, Spain, and Goa. In some other countries they are now content to say: “Believe, or I detest thee; believe, or I will do thee all the harm I can. Monster, thou sharest not my religion, and therefore hast no religion; thou shalt be a thing of horror to thy neighbours, thy city, and thy province.”

If it were a point of human law to behave thus, the Japanese should detest the Chinese, who should abhor the Siamese; the Siamese, in turn, should persecute the Thibetans, who should fall upon the Hindoos. A Mogul should tear out the heart of the first Malabarian he met; the Malabarian should slay the Persian, who might massacre the Turk; and all of them should fling themselves against the Christians, who have so long devoured each other.

The supposed right of intolerance is absurd and barbaric. It is the right of the tiger; nay, it is far worse, for tigers do but tear in order to have food, while we rend each other for paragraphs.

Voltaire also writes in his banned Treatise on Tolerance on the Occasion of the Death of Jean Calas as though he were able to speak to the religious intolerant:


This little globe, which is no more than a point, rolls, together with many other globes, in that immensity of space in which we are lost. Man, who is about five feet high, is certainly a very inconsiderable part of the creation; but one of those hardly visible beings says to some of his neighbors in Arabia or South Africa: Listen to me, for the God of all these worlds has enlightened me. There are about nine hundred millions of us little insects who inhabit the earth, but my ant-hill alone is cherished by God who holds all the rest in horror for all eternity; those who live with me upon my spot will alone be happy, and all the rest eternally wretched.

My point? We seem to find more and more reasons to castigate one another, and, seem to be eager to find reasons to do so. We are increasingly intolerant of the beliefs of others--religious and otherwise--and have no compunction about attempting to troll and shame them on social media. We seem to find it easier to creep into odd corners of extremism than engage in actual conversation, to understand the reasons for someone else's ideas.

While we talk a lot about free speech, it seems to me that we have no idea what that really means.