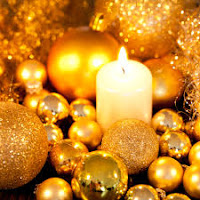 When I arrived at O'Hare airport last night, there were teams of people putting up Christmas, er, holiday decorations. Ribbons and lights festooned the ticketing areas and they were putting lights on ginormous wreaths. I couldn't help but think of the sputtering brouhaha over the Starbucks red cups, those that some wingnut evangelical Christians suggest Starbucks is anti-Christian, and I speak as an evangelical Christian who fervently hopes she's not a wingnut. Oh for the love. They seem to have forgotten another threatened boycott over the mermaid. I am exasperated that people seem to think that God cares about mermaids, doves on coffee cups, or much else of that ilk.

This morning, as I was drinking my pour-through coffee and reading the newspaper, I saw that United is reconsidering its on-board coffee. I was thrilled because the coffee in the United Clubs and on its planes is horrible. Yep, first-world problems. 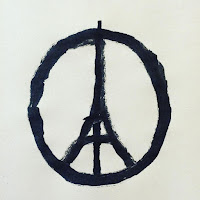 Then I turned my attention to the important news of the day. Political leaders wrestling with how to handle, or not handle, thousands of migrants. Muslims being frustrated and terrified that they are being once again swept up into the free-for-all of anti-Islam sentiment.

A friend of mine posted something the other day about students responding to microaggressions. Yep, it's a real thing. I can see this getting out of hand with some folks who will begin to use the idea of a microaggression as an excuse for something. But having read an article on racial microaggressions, I was acutely aware of my own lopsided thinking when I was visiting a high school yesterday. I didn't see many Caucasians; most of the students, and teachers, are African-American or Hispanic. I saw a blonde girl with lighter skin and immediately thought, "Oh, a white girl. . .unless she's a light-skinned Latina with blonde hair." Because I know that not all Spanish-speaking people are dark-haired. Why did I think that? Because, just like everyone else, some part of me wanted to see someone like myself. No one at the school cared that I'm white but it is a deep-seated need, I think, to find some kind of solidarity. 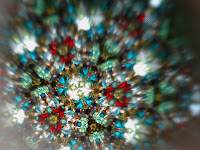 Where does this take me? Nowhere in particular. My thoughts are like a kaleidoscope.

After the Paris attacks, Pope Francis decried them as part of a "piecemeal third world war." I thought of that observation as I reflected on this convergence of the G20 summit, the Paris attacks, the number of people fleeing the destruction of their homelands and generally because of the violence of ISIS. I wondered if people were started to think of those murdered by ISIS as martyrs to a cause and not just because I did. I wondered if at what point politicians stop trying to protect their political asses or their legacies and act with some forethought about what makes the most sense for the world rather than whatever tiny pieces of history they hope to occupy in the future.

I wondered at what point we might start thinking of others before we think of ourselves, before we react to real and imagined slights, before we think we might have been offended. I wondered when we might become compassionate people who decide it's really not healthy to seek revenge for whatever might have happened recently or a few centuries ago, or both. I wondered when adults would become sufficiently adults so that 9-year-old children aren't lured to their deaths. I wondered when instead of sniping at each other about the difficult situations in which we find ourselves, we would step down from our imagined righteous vantage points and have actual conversations.

I wondered, especially as Americans approach Thanksgiving and the world approaches the winter holidays--Kwanzaa, St. Lucia Day, Hanukkah, Advent, Fiesta of Our Lady of Guadalupe, The Prophet's Birthday, and, of course, Christmas.

I have friends who celebrate many things in multiple ways in December because they celebrate their heritages as well as their traditions, and sometimes to honor their friends and their friends' traditions. I know that many will be offended by the idea of celebrating something that is not part of their own tradition; so be it. I remember when the pastor of the Conservative Baptist church I was attending included elements of the Seder in his sermon. Why? Because much of Christianity is informed by its Judaic roots. As someone who is Jewish by birth but Christian by choice, I loved that. By the same token, I appreciate my friends who celebrate their faith through routes different from my own, who grew up in the Episcopalian church, was saved in a Southern Baptist church, and now align myself with the Evangelical Free church.

I have a copy of the Qur'an. It's a translation with commentary. I've read only parts of it but plan to read it in its entirety this holiday season. I need to understand this book of Islam better so I know what the heck I might be trying to talk about when I wonder about the differences between Islam and my own faith.

I wonder, too, about how not to slip slide into a morass of confusion and realize it's hard. But it occurs to me that those who shout with conviction informed by something I don't recognize but often looks like hate might be doing so out of fear as well as some ignorance. Does God hate? Yes, He hates sin and those who profess Christ are sinners saved by grace, which means we're still sinners because, well, we struggle to put God first. Always. For some, however, that means God hates a lot of things but I often think they believe God hates what makes them uncomfortable.

In Exodus 20:3, Scripture says "You shall have no other gods before me" (NIV). I'm not a theologian so I'm approaching this simply. To me that says, "Don't worship anything else but God. Don't worship money, your career, your opinion of yourself, your own views. Worship God. Period." 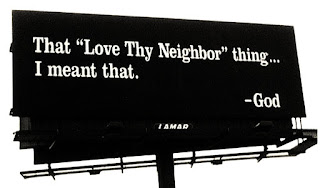