Muhammad Ali died Friday, June 3 at the age of 74. The internet is churning with people remembering him, a man who wondered if people will remember him. It's hard not to remember Ali if you read stories of him, or watched his boxing matches in person or on TV, or even if you saw him light the torch at the 1996 Olympic Games in Atlanta. Ali will be long remembered because of his style, his athleticism, his greatness as a boxer. He will be remembered through his children and his grandchildren as well as his photos, newsreels, and films of his boxing career.

My mother has dementia. My stepfather is in hospice, failing for reasons that are unclear following a fall and then a spike in his blood pressure they were able to stabilize. My mother has become very attentive towards my stepdad, which is good to see. She puzzles in frustration over what happened to him and why. When I was with her recently she said, "My name is known. I think." And then she murmured, "I think people will remember me."

It was an odd, heart-breaking moment as she contemplated, I think--and I can't be sure--her own mortality. But then she looked up and said, "People do know who I am, right?" and I thought perhaps she'd been in the present and had been thinking about her own challenges for recollection. I assured her that people know who she is and that seemed to satisfy her and we moved on to something else.

It made me think about what we do and why we do it. I've often thought about how we go about our days, being concerned about our time and whatever it is we're doing. As I travel in bumper-to-bumper traffic in various cities, people in a rush to get wherever, I wonder about their stories. What is so important to get to? A dance recital? A business meeting? A soccer game? An illicit tryst? I wonder about the person who weaves in and out of traffic trying to get wherever faster than anyone else, or because the driver is a daredevil. I wonder which is true.

I think about the people at airports and wonder where they're going and why. I see people get off planes and hustle or mosey down the concourse. Some are clearly on vacation and others are obviously trying to catch another flight, while others might be in a hurry to get to a business meeting or are just in a hurry. Not too long ago I saw a woman greeted by another woman; the arriving woman collapsed into the waiting woman's arms and they both started to cry. The waiting woman was trying to console the other. Their grief was raw and palpable.

I was walking to a gate at an airport recently, talking with a social worker from hospice. She wondered about the background noise so I told her I was at an airport. She said something to the effect that we wonder about who others are talking to as they walk through an airport. "I bet not too many are talking to social workers." Well, you never know. . .except for the loud talkers who let you know they're having Important Business Calls. 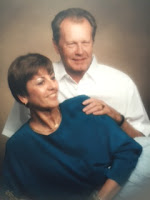 My mother may be remembered by some of her former Girl Scouts or the people she taught to swim or the people to whom she taught first aid. What she and he will never know is in what ways they made a difference in peoples' lives.

So perhaps the best most of us can hope for is to know that we've done the best we can and worked as hard as we can to do well.