The Power of Information 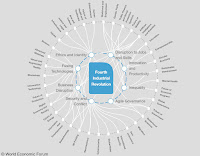 In 2016, Klaus Schwab of the World Economic Forum spoke of the impending Fourth Industrial Revolution. In this article, Schwab spoke of the disruption already being caused by the Fourth Industrial Revolution because of such technology as "artificial intelligence, robotics, the Internet of Things, autonomous vehicles, 3-D printing, nanotechnology, biotechnology, materials science, energy storage, and quantum computing." Watch the 11-minute video and be a little afraid, a little awed, a little perplexed. The more technologically complex our world, the more complex and important the need for information literacy.

I don't think there is a simple binary response to what Schwab discusses. It takes some reflection and thinking.

But the point of mentioning the Fourth Industrial Revolution is acknowledging how incredibly fast information is available to us and how MUCH information is available to us. Because there is so much, we each likely tend to find the sources most manageable and often that also means the sources that most appeal to our individual perspectives. Perhaps without meaning to, we shelter ourselves from differing opinions and perspectives. Soon, because of the onslaught, we isolate ourselves from differing opinions and perspectives because it is easiest, because it is less upsetting, because we hear what we want to hear and so we no longer have to reflect or think. We can just be outraged or concur with like thinkers.

The people of the United States like to think our government is a democracy. A simple definition of democracy is "a system of government by the whole population or all the eligible members of a state, typically through elected representatives." There are some who people democracy is dying in the United States, that we haven't been a democracy for some time, and that we might still be able to recover a true democracy is "We, the People" can get our collective acts together. (I've before bemoaned the fact that too many people forget that "We, the People" are, in fact, the federal government. So when they wonder why there isn't any change at the federal level, they need to check the last time they actually went to a poll to vote or got involved in any way, shape, or form with exercising their voice as a citizen. Those folks in the White House and Congress work for us and they need to be reminded of that now and then.) 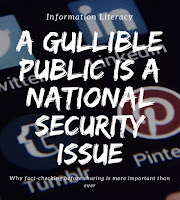 However, for us to get involved and to be truly informed on the issues, we have to do more than listen to our favorite commentators and read or watch our favorite news sources. It's extraordinarily rare that any of them offer an unbiased telling of the news or provide a sufficient context. We have to trust ourselves to do that. And that is why I encourage you to read Vicki Davis's blog post: A Gullible Population is a National Security Issue.

If you're already a bit weary of reading, I'll overlook the potential irony that reading is too much work for you and will attempt to summarize some of her key points, but I exhort you to find time later to read the whole blog post on your time. It is well worth your time.

First, the concept of "weaponized social media" is not new. Vicki notes that cyberweapons have a clear intent. Note her emphasis that weaponized social media seeks to leave people "angry or confused." Think how many times you've seen someone share something through social media and note how outraged they are, and that people have to do something to make sure "it" is stopped. Think about how many times you have simply reacted to that person's outrage without doing any research on your own to test the veracity and validity of the post.

Second, Vicki digs deep into some of the ads that caused such dissent, frustration, and outrage among the American people. As she notes, people responded to some of these ads in very real ways because something tipped in them, some message rubbed an already sore spot or inflamed a sensibility that had been simmering. People simply responded and often, it seems, without thinking and without wondering about the source.

Third, and perhaps most importantly,

This makes the work educators and parents do with information literacy and digital citizenship an imperative, not something that would be nice to include if we only had time. It's not just the purview of library media specialists.

It also means that we have to be conscientious in the way we behave with social media. Not liking for the sake of liking, not sharing simply because whatever we saw or read seemed to strike a chord.

A professional acquaintance recently shared something on Facebook by a well-known blogger. I took a bit of exception to what the blogger had to say and I did some research on what he said. I wasn't going to post because, well, who am I? That guy is famous and people flock to hear him speak and share his pithy posts and read his books. I'm just, well, a person who likes to do research and has a healthy dose of skepticism as part of her DNA. But I thought he was wrong or a bit to pithy though, in the end, he made a great point. That made me wonder how many people he lost before he got to the most important point and why he might have lost them, which made me realize that information literacy isn't just about doing research and testing the veracity of sources, but it's about tenacity and being will to hear or read ALL of the words. 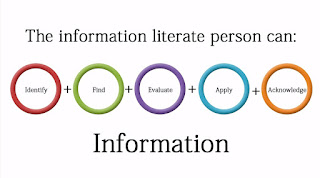 So information can be powerful. We can give it more power depending on how we support it and how we share it.