The government shutdown continues because the impasse over the wall that isn't a wall continues. After a nice lunch, Lindsey Graham has more confidence that Trump knows what he's doing about Syria. I couldn't help but wonder what they had for lunch. On the other hand, Trump rather disingenuously said that slowing down the withdrawal from Syria is all part of the plan, or something. I don't really pay attention to what he says because it changes too fast.

Meanwhile, many look towards the incoming class of new politicians who will soon be met with their own hard wall of reality. I can only hope they will have the determination and the fortitude to fight for the changes they believe are best for the whole country, not just special interest groups that might employ them after they leave government service.

I can't help but think about how both Angela Merkel and Emanuel Macron have been forced to backtrack when trying to do something that will help the whole planet, but have done so in the face of economic realities. They have learned about the "iron law" the hard way.

Another way to look at the iron law is that if people don't want what you're selling, or they aren't willing to pay the price you're asking, they won't buy it, which also suggests that if you can't convince them that they need it, they won't buy it.

In other words, don't mess with my money.

Speaking of money, here we are at the end of the year and folks start thinking about taxes. You've likely been bombarded with emails alerting you to today being the very last day you can contribute to any organization. That comes as no surprise because December 31 has always been the last day of the year (well, since a good portion of the world adopted the current format of the Gregorian calendar and there is quite a history to the creation of the calendar format we use today) and December 31 is the last day for any charitable donations. Anyway, around September 2018 stories about charitable donations and the new tax plan started to surface. More tax-related stories became more prevalent in November, and for good reason. People were thinking about buying Christmas gifts and about charitable donations.

Most of us probably didn't pay much attention to the impact of standard deductions and charitable giving; I know I didn't. Now I am. Close attention and yes, I'm rethinking to which organizations I give and why.

I'll still give because there are organizations in which I believe and tax deductions have rarely been the motivation for such giving, but you can believe that lots of organizations are worried about their revenue streams after people figure this out. It's a variation on the "iron law," but money talks. Loudly.

Speaking still of money, the stock market is bordering on insanity, unemployment seems to be staying steady at an astonishing low, the job market is hot in many sectors (provided one has the right training, access, and/or ambition. . . and a college degree isn't always required). Economists are trying to figure out if we're headed towards another recession as the Federal Reserve attempts to figure out what's happening with all of the various indicators it tries to analyze.

Meanwhile, teachers are leaving the profession in unprecedented numbers because, well, they just can't take it any more. The field of education practice is changing at nearly warp speed (for education) whereas the field of education preparation continues to stroll along as though it's still 1979 (a random year ending with a 9, but still well before 2019). Educators are bombarded by administrators and parents, asked to do more or different with resources and tools for which they've not been prepared or in which they've not been trained and for which they have no coaches or mentors who are much better prepared or trained than they. There are just too many factors that too few have too little to focus on what matters most: students. There is so much work to do to make good changes to education and everyone has lots of ideas though I can guarantee there is not one single thing that has to change, but many things at each school and each school will have to find its own changes. Those district-wide sweeping implementations for change haven't always worked in the past and probably won't work in the future unless schools are given autonomy to make adjustments that make sense in their buildings. But, no matter what changes are made, the work always has to be about the students because the changes the teachers make for their own time, their own sanity, their own efforts is almost always about the students.

At the end of that litany of despair, it may be hard to look towards 2019 with much hope. And on this dreary, rainy New Year's Eve day, hope might not be in abundance.

You are, no doubt, familiar with the mythology of Pandora. There is much about her creation and her name that contributes to the final scene of her story: how the gods gifted her (Pandora means "all gift") and how Zeus used her as a trap. When his trap was sprung, he gave her the jar or box as a wedding gift which she was never to open. Eventually, of course, curiosity proved to be too great and she opened the box. From it flowed all the evils of the world. When she slammed shut the box, the only thing that remained was hope. Eventually she did release hope and from that comes all sorts of poetry and imagery and ideas about the power of hope.

The idea of hope has fascinated people for eons. I'm amused that scientists try to explain hope because it seems to be an intrinsic part of most people in most situations. I'm not going to try to defend that statement with lots of examples because I know there are plenty of people who have lost hope and who lose hope. However, my point is that hope is one of the few things that really does seem to spring eternal. (Read the entire Pope poem, published 1733-1734, to understand how and why he has this perspective; it is really quite powerful). 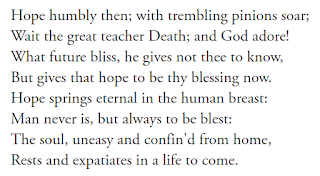 I look at my world today at the end of 2018 and there are reasons to be discouraged. But, at the same time, there are great reasons to be encouraged. The work my friend and her friends and neighbors are doing with Annunciation House in El Paso to provide for the migrants there. The work I get to do with educators. The incoming politicians who just might have the tenacity to stay focused and true, at least that's what I'll hope. The people I know of who have become more involved in their communities because of so much else that's been going on. The kinds of conversations--yes, actual conversations--that many are having and because of so much of what's been going on.

And so hope moves us. Hope for something better this afternoon or tonight or tomorrow. Hope there is more or other than moves us from where we are to where we think we want to be or what we want to do.

Hope gives us reason to continue even when we wonder if there's a point.