Student (and other) activism: Not for the faint-hearted

I learned about Sophie Scholl around 3:30A several mornings ago when I couldn't sleep. For some reason I decided to check Facebook and found a post about Sophie Scholl, which led to a bit of wee hours research followed by more research when I was more alert and fortified by coffee. 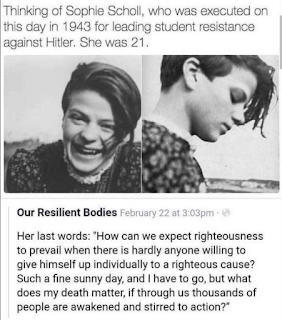 I've done more reading on her and reflected a bit more in light of several things. First, the response to the Christianity Today editorial by Mark Galli.

Second, the response to the policy of a school in Northern Virginia which will allow students one excused absence for activism.

Third, the groundswell of response, both negative and positive, to Greta Thunberg that soon became something of a tsunami that has now become a tiny wavelet barely lapping at the shore. Which has led me to thinking about the ebb and flow of outrage that becomes indifference or limited outrage about something else that attracts our attention. (ICE? Immigration? Children in cages? Stephen Miller? Anyone? Anyone?)

But I have to start with the kneejerk reaction that some conservatives seem to believe that everything that is not in lockstep, a word I've chosen intentionally, with their way of thinking is "far left," "liberal," and/or "snowflake," or all those combined. Good grief! The way some of the conservatives respond, they are the snowflakes--triggered by the slightest thing that seems to be outside of their slowly shrinking comfort zone.

So this young woman, Sophie Scholl, began her activism while in college. She didn't seem triggered in the way its meant as an insult. She seemed triggered in a more powerful sense: her triggered response was one of outrage and action. There are different accounts of her last words--just before she was beheaded--but we do have this:


In the People's Court before the notorious Judge Roland Freisler on February 21, 1943, Scholl was recorded as saying "Somebody, after all, had to make a start. What we wrote and said is also believed by many others. They just do not dare express themselves as we did."

"What we wrote and said is also believed by many others." Yes, and we believe such things quietly in the privacy and safety of our homes and heads, where we cannot be attacked or shamed or trolled in a toxic social media environment. And that is because we often do not dare to express ourselves as others have.

That led me to think more about the editorial written by Mark Galli. He is on the brink of retirement, though some news outlets have written that he was forced to resign because twisting the facts seems to have become a journalistic norm for an opposing viewpoint. In October 2019, Mr. Galli announced his retirement effective January 3, 2020. It's possible he felt compelled to take advantage of the platform while he had it and perhaps being mindful of his own failings.

I should note that I found a piece by Julie Roys who published her own scathing article in which she seems to applaud Galli's editorial but then seems to want to take down CT, Mark Galli, and others because of their past hypocrisy, because she didn't get an apology, because she didn't get whatever it is she thinks she deserves. I followed up on her accusations and there is likely some fire among that smoke, especially with the Harvest Bible Chapel/James MacDonald connection. I don't dismiss it but I have to say that her outrage about Christians being hypocritical is disingenuous. Christians are often hypocritical. We are human and humans aren't fallible. I mean, look at so many of the evangelical right just now. They are hypocrisy writ large. Which was one of the purposes for Mr. Galli's writing in the first place, I think, And perhaps his own need to reconcile whatever is happening in his heart, which is between him and God. Or maybe he felt like his "somebody" moment is now.

So as media outlets are trying to say that Galli was forced to step down because of his editorial, on the flip side, digging through the morass of hysteria about Galli's non-resignation, I found an open letter from CT friends who affirm Mark Galli's editorial. I've also read that while CT lost about 2,000 subscribers, it gained about 5,000 subscribers; I'm not (yet) among them.

Let us now consider the school policy causing its own wave of outrage about conservatives. Starting January 27, Fairfax County Public Schools will "permit students in seventh through 12th grades one excused absence each school year for loosely defined 'civic engagement activities'" that might include marches, sit-ins, trips to lobby legislators. Here's the thing: if parents want to haul their kids out of school to take part in their civil liberties, no one can stop them. What this school district has done is acknowledge that one of the best experiences students might have is to really learn about democracy, about what it means to be a citizen, about what it means to participate in something that is bigger than themselves, about what means to stand for something. Shame on them? Nope.

This article notes that the district has already faced some "backlash online from conservative critics who charge the policy is the latest instance of the left coddling its too-liberal, too-sensitive youth." What are those conservative critics afraid of? And how dare they assume that these are the actions of "the left" and that the youth are "too liberal" and "too sensitive." Who is being triggered now?

And so to Greta Thunberg, who is going to be interviewing Sir David Attenborough. The 16-year-old climate activist says what's on her mind and for that she gets both lauded and excoriated. Thunberg is TIME magazine's 2019 Person of the Year. She seems to take that and all of the criticisms and snide remarks in stride and to continue the work about which she is sincerely passionate.

I recently had dinner with a friend and we talked about how we are reluctant to join any online conversations for fear of the herd turning on us if we dare to disagree with the crowd. That has been on my mind as I think about Sophie School, Mark Galli, Fairfax County Public Schools, and Greta Thunberg--none of whom or which are perfect, without any kind of blame, and without any degree of hypocrisy or failure in something or another--just like the rest of us.

That led me to wondering about what I'm willing to stand for and how willing I am to stand for it, which led me to, yes, the internet. I found this 2017 piece by Ken Wert: What do you stand for? It is a provocative question, and one I need to answer as I think about my willingness to express myself and perhaps be that somebody to say what others are unwilling or unable to express. As do we all. 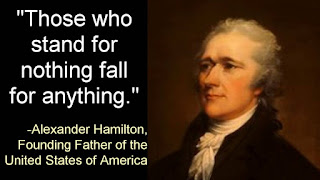 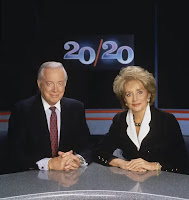 You've seen the Barbara Walters montage of "This is 2020" as she introduced the TV show 20/20. And you've been deluged, as have I, with the various collections reflecting on all the good, bad, and ugly of 2019--that which we should have seen, done, or eaten and that which we did well to miss. You've read and heard about peoples' resolutions.

For me, the day dawned with clear skies and a shining sun, which was especially nice after days of winter dreariness. I'm grateful for a new day and that the turn of the page on a calendar, the change of digits at the end of a year, can mark a new and fresh beginning. 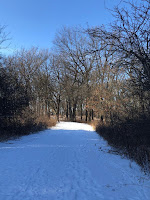 I marked the day with some errands, but also a lovely, long walk in the glorious sunshine, the air crisp and cold. Other than a few other intrepid souls, there was little noise other than the crunch of snow under my boots and the occasional call of geese as they flew overhead. It was a good start to the day and to the year.

Like some others, I resist resolutions because I know how easy it is to fall short within, I don't know, maybe 48 hours? That could be generous. But this year I've opted for a few resolutions and not just because I think I can keep them. I've chosen these three because I think three is manageable and because I believe I'll be a better person if I can have any success with these. 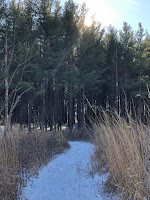 There is a lot of ugliness in the world and all kinds of ugliness. I won't ignore them, but I won't let them consume me. I won't make that a resolution because I know how hard it is to resist railing against indifference and ignorance as well as flat out, outright stupidity and ugly, violent, and cruel behaviors. But that means leaning more on my first resolution of being kind and making whatever difference and impact I can in my small spheres of influence.

So perhaps I have a fourth resolution and that is to resolve to be aware of and informed about the chaos but not to let the chaos overwhelm me. And if feels as though it's starting to overwhelm me and starts to grip and wither and blacken my soul, I'll go for a walk and rejoice in fresh air and God's beautiful creation. 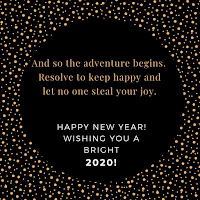