Literature and Spirituality: A Journey Begins

This journey actually began several days ago. I’d volunteered to take on another class at Judson University where I’m an adjunct. This particular course fit my schedule and it looked interesting.

I downloaded the meager selection of syllabi I could find and promptly wondered what I’d gotten myself into. But mostly I started thinking about the word “spirituality” and what that means to people.

The last question continues to morph as I think about how people express their concept or sense of spirituality through their art—books, poetry, film. Probably memes and podcasts, too, but I’ve decided to stick with the basics for now. 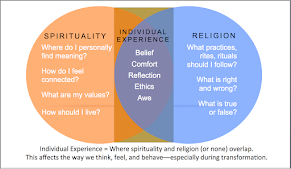 Then I sent an email and posted the question to friends on social media: What does “spirituality” mean to you? I gave them some context for the course and shared this image from Wellspring Passages. Why that source? Because the image seemed to capture what I think most people might consider as they think about what they think spirituality is and means.

Then came the books as I began to wrestle with how I might teach this course and on what I might want to focus. I ordered copies of some of the books from earlier syllabi, although I did have some of the books, such as Saint Augustine’s Confessions and John Bunyan’s The Pilgrim’s Progress.

I searched for titles and perspectives online and downloaded a lot of academic articles about spirituality.

My quest to begin to understand how I might start to encourage students to think about spirituality got real with some of those articles. I will also note my exasperation level occasionally spiked as I read, but that’s probably just me and my enduring frustration with the condescending tones that too many pedants seem to prefer.

So what have I learned so far? I’m going to start with the last two articles I found that are actually less “academic.” One was published by the National Alliance of Mental Illness (NAMI). NAMI offers a straightforward definition of religion and of spirituality: "Religion is an organized community-based system of beliefs, while spirituality resides within the individual and what they personally believe. “The idea of religion and spirituality is like a rectangle versus a square. Within religion there is spirituality, but if you have spirituality, it doesn’t necessarily mean you have religion.”

Now, I’m an English teacher and a word nerd. I liked the image of the rectangle versus square: two shapes that are similar but different in that they both have four sides and they both have four 90º angles. It’s a comparative image that makes sense. But the word choice of “have spirituality” and “have religion” struck me.

NAMI goes on to state that religion “gives people something to believe in, provides a sense of structure and typically offers a group of people to connect with over similar beliefs.” In comparison, spirituality “is a sense of connection to something bigger than ourselves—it helps a person look within and understand themselves while also figuring out the greater answer of how they fit in to the rest of the world.”

I think when people think of religion, we think of Judaism, Islam, Christianity, Buddhism, etc. We might then think of the rituals and practices associated with that religion, and the principles by which adherents to that religion should live or the beliefs they have about how they should live and act towards others. Religion, then, is an umbrella term.

In another article, Patrick G. Love cites a synthesis of definitions of spirituality he had developed with a colleague:

Then I went back to some of my academic articles to review some of what I’d highlighted, underlined, or otherwise marked as possibly interesting and/or important.

I’m still reading, processing, and synthesizing. Some of my friends have gotten back to me with their thinking about what spirituality means to them.

The journey has just begun.

I’m glad we met you in person (at Carolyn’s) and am looking forward to following you on this particular journey :)