We've been in class for a few weeks and I have to say conversation has been, well, let's go with muted. There are three or four students who are willing to speak up. I'm not convinced all of them have read the texts even when they speak up, but one step at a time.

We spent the first two weeks with the Vedic Texts and flood myths. Students were to have read some texts about Pandora as well as a wonderful summary version of Ovid's Metamorphoses.

There seemed to be no curiosity about the antiquity or longevity of the ideas. There seemed to be no wonder about the approaches to the story of a flood, even though there may be over 200 versions of that story. So no one else who seemed to say, "Huh. Potentially hundreds of versions of the story that tell us there was a flood. All of the stories say humanity was destroyed. All of them have versions about how the Earth was repopulated. What does that suggest to us?"

Sure, that may become more of a theological question than a literary one except for the fact there are texts--literature--that relate the history (also humanities) of a flood. Different versions, yes, and with significant cultural details (also humanities). Also insights into how culture was and has been influenced by those very same stories.

Nothing. Maybe they were busily wondering and being curious in their heads.

And so, to Augustine and his Confessions. We had a rough slog through the first two books. I went slowly through Book I to highlight key ideas because, you know, literature. I pointed out figurative language. I pointed out other literary devices, but mostly I paused at certain moments to ask how current Augustine's thinking seems to be. Crickets.

So before we started Book II, I asked students if they would prefer lecture to discussion. I told them it doesn't matter to me because I'm happy to try to facilitate discussion. However, if they chose discussion, they had to actually discuss. All of them. Not just the three or four students who seem to speak up.

They chose discussion. Maybe they need to warm up more.

So I've really been having fun reading Confessions. Sure, there are some things that seem dated and yet others that are powerful and current. I'll mention two things.

The first was humorous to me because I teach writing. In Book I Augustine complains about his education, even as he expresses how much he values learning. There were some things he wasn't too excited about having to read, and I laughed when I realized he was reading Homer's Iliad. In Greek. And probably Homer's actual version. He didn't much care for some of his school masters just as many students don't much care for how their teachers teach today. At least in Illinois they don't have to worry about corporal punishment, which isn't the case in all states.

In Chapter 13 of Book I, Augustine writes "The first lessons in Latin were reading, writing, and counting, and they were as much of an irksome imposition as any studies in Greek" (34). He goes on to say the lessons were practical and valuable. "They gave me the power, which I still have, of reading whatever is set before me and writing whatever I wish to write" (34). Then he mentioned he wasn't overly fond of Aeneas, something students in 2022 might say though for different reasons. At least today's students aren't reading it in Latin.

The second thing I found in Book I, Chapter 5; it set the tone for the spiritual philosophy of this text. Augustine wrote "Why do you mean so much to me? Help me to find words to explain. Why do I mean so much to you, that you should command me to love you?" (24).

I told my students that those two questions could be at the root of anyone's spiritual journey even if they are rephrased. "What is my purpose?" "Why am I here?" "Why do I matter?" "Do I matter?" Those are questions many of us have asked and some ask in pain or wonder.

Any believer of any faith could ask why they mean so much to their god? Or if they actually mean anything to their god?

This, for me, is so powerfully important to the consideration of spirituality, especially if I'm looking for a life of meaning and purpose.

We have the opportunity, and perhaps even the privilege, to read how others have wrestled with these questions and with their understanding of sin or what it could mean to fall short or believe they fall short of whatever their god or gods expect or might want.

We saw that in the excerpt we read of Hymn CXXI. The line repeated throughout this hymn is "What God shall we adore with our oblation?" 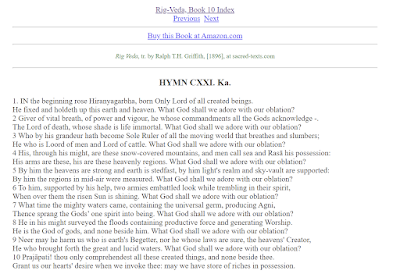 In Book II, in which Augustine focuses on the theft in the pear orchard, Augustine writes ". . .yet no one is to be feared by God alone, from whose power nothing can be snatched away or stolen by any man at any time or place or by any means" (Ch. 6, 49).
The last three lines of that book are powerful; it is possible to see the arc of Augustine's thinking in Chapters 8 and 9, at least. The last three lines read: "In him [God] that is goodness itself he [anyone] shall find his own best way of life. But I deserted you, my God. In my youth I wandered away, too far from your sustaining hand, and created of myself a barren waste" (53).
The imagery alone of the creation of one's self a barren waste is powerful. The connection, to me anyway, to those questions of mattering to God and wondering why God matters to any of us, is present in these observations about choices and their consequences.
In class? Thoughtful nods. Maybe they need more time to process.
So students were given questions to consider for Books III and IV. I'll post questions to consider for Books V through IX. And I'm working on some strategies that will require students to discuss their thoughts. I don't think they believe me that there are no right answers about what they think about these texts, provided they are reading them.
And so it goes.