Literature and Spirituality: Wrapping Up Augustine and Unwrapping Boethius

In my last post, We've been in class for a few weeks and I have to say conversation has been, well, let's go with muted. There are three or four students who are willing to speak up. I'm not convinced all of them have read the texts even when they speak up, but one step at a time.

One of the things I said in my last blog post was that maybe students needed a bit more time to warm up. I was thinking they needed to warm up to me, to the class, and to each other. After all, I know that the majority of the students are taking the class because it fits in their schedule and meets the upper-level literature course they have to take.
I've battled that mindset before and it won't be the last, so I'll deal and try to whine less.
Last week I tried a different kind of activity. I'd given students questions to consider for many of the books. I created four overall topics from those questions and each topic was on its own piece of chart paper. Students created their own groups, each group had a marker, and each group started at a different piece of chart paper. They discussed and wrote whatever they thought applicable to that very broad topic. Then they rotated to another piece of chart paper, and so on. Then they revisited the chart paper to see what others had written after them, and then we did a debrief.
The next class period I tried a variation of that theme with a sort of Jeopardy-like question approach, but that wasn't quite as successful. We had several students missing that day, and that change in dynamic matters. 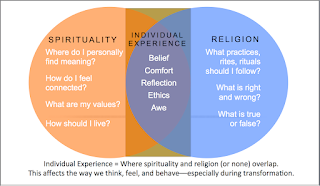 This week we'll be wrapping up Augustine and I'm going to ask them to start a spiritual "map," and I use the word "map" very loosely. I had shared this image with them early on in the semester. I refer to it periodically to help them be mindful of how others might think of spirituality as well as how others might view religion and faith as, perhaps, an expression of their religion and/or spirituality. This speaks, I think, to those who believe themselves spiritual, but not religious.
I've also reiterated what Augustine wrote in Book I, Chapter 5: "Why do you mean so much to me? Help me to find words to explain. Why do I mean so much to you, that you should command me to love you?" (24).

I've reminded my students that those two questions could be at the root of anyone's spiritual journey even if they are rephrased. "What is my purpose?" "Why am I here?" "Why do I matter?" "Do I matter?" I might add the question "To whom do I matter other than my family and friends, and how do I know that?"

For those who are seeking a life of meaning and purpose, regardless of what they believe to be true about God or gods or a Supreme Being, these are important questions.

This, for me, is so powerfully important to the consideration of spirituality, especially if I'm looking for a life of meaning and purpose. As I've said before, we have the opportunity, and perhaps even the privilege, to read how others have wrestled with these questions and with their understanding of sin or what it could mean to fall short or believe they fall short of whatever their god or gods expect or might want.

So as we wrap up Augustine and turn towards Boethius, I want them to somehow map or document what they've learned using this image as a starting point. How would they adapt it and why? In wrapping up Augustine, we're going to focus on 1) his key relationships: his mother, Bishop Ambrose, and Alypius, a friend of conflicting influences; 2) Book VIII and what pulls him toward evil and what pulls him toward good; and 3) those spiritual journey signposts in Book VI that might translate, if you will, to anyone's spiritual journey.

Boethius wrote his Consolation of Philosophy as he awaited execution for treason and other things, such as magic and sacrilege. The text is a dialogue between Boethius, as Prisoner, and Philosophy, personified as a beautiful woman. The work is a logical argument. Is it consolation or comfort as we might surmise? Hmmm. Probably not to many readers, but the questions Boethius asks have startling relevance.

Is Boethius's Consolation specifically Christian, even as Christianity was understood in his time? No, and that is significant. The work also challenges us to think about the role of reason and the senses in grappling with reality as well as how we understand however we perceive God.

How each student creates his or her "map" will be up to them, and they will revise and update it as we continue to read other classical texts (Donne, Bunyan) and then more contemporary texts (Tolstoy, Achebe, Tan, O'Connor, Sepetys, Lewis).