7 things you don't need to know about me

Folks in my Plurk PLN (search for "peregrinator" to find me) have been involved in this 7 things meme. I was tagged by Mindelei Wouri (US) and encouraged by Jo McLeay (Australia) to do the same. Be sure to check out their blogs, but also visit the 7 Things wiki to learn more about all of those who are participating in this meme.

The focus of this meme is to reveal unusual things that others, virtual and tangible, may not know (or really need to know) about you.

So that's my story. In addition to Mindelei and Jo, you'll want to check out any of the amazing people who are listed in the wiki. You can just go to the wiki and follow the link to any one of several people who have shared at seven things you don't need to know about them.

I was flipping through my current issue of Newsweek this morning and read a quote by Russian academic Igor Panarin that the United States is likely to disintegrate by 2010. I'd missed this when this article when it first came out on or around December 30. I was being blissfully unaware as the old year shuffled to a close. Idris Mootee blogged about this by mostly including the WSJ article and included some notations. I've some thoughts on this intrig 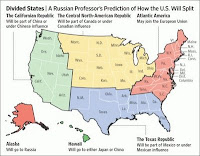 uing form of potential plagiarism, but that's too much of a digression just now. Aftermath News included the story as a blog post, but also included a delightful map that illustrates Panarin's view of the Disintegrated or Divided States.

Quite honestly, I don't think we're going to disintegrate quite that soon, but I'm not so sure the Republic will continue to endure if we don't see a lot of changes, and not just those the new president may theoretically implement.

A headline that caught my eye today reads "Angry Ohio boy, 4, shoots babysitter." Say what? A four-year-old boy got miffed with his babysitter and shot him? Seriously? (I don't know how to express the incredulousness in my voice and how many octaves it might have climbed.) The babysitter is fine; the shotgun attack was not fatal. Now you might read the story and get all righteous because they're living in a trailer and you have certain impressions of the kind of people who live in trailer parks, especially in Jerry Springer's state. Come on, you know you went there. And why did the 4-year-old shoot his babysitter? Because he got angry because the babysitter "accidentally stepped on his foot."

It's this kind of thing that makes me fear for my country. It's not the Clinton administration redux we see happening in DC right now. It's not the excessive amount of money that's being spent for the Obama Inauguration (Yes, I know it's an historic event, but so is this recession. LOTS and LOTS of people without jobs. Businesses crashing like buildings in the path of a rampaging economic Godzilla. Is this really a good message to the American people?). It's not the proposed tax cuts that may be forthcoming (intended for spending stimulus, I get that, but states are going bankrupt; can we really afford more tax cuts?).

Cultural historians refer to those born in the 1970s, 1980s, and 1990s as the "me" generation. Classroom teachers bemoan the sense of entitlement that some of these kids seem to have. An article in the New York Times (oddly dated January 17, 2008; did I miss something?) reports on this as a narcissitic generation. If we're objective, we'll see that many of these characteristics can be applied to nearly any generation and we do all a disservice by generalizing the behavior of an entire generation. Even so, when we look back on the 1980s and the 1990s, we do see certain cultural behaviors. Parents spending a great deal of time raising their children to feel good about themselves and getting huffy with teachers for giving kids the grades their learning deserved because the child might feel bad about himself. Parents spending way too much trying to make their children's lives easier and more palatable rather than requiring them to do their homework or holding them accountable for their behavior and actions. Not all parents and not all kids, but perhaps too many of them.

I think much of what we see today in attitudes and sensibilities about "rights" has been fueled by these last 30 years of behavior and perceptions. We need to get a handle on our attitudes and be more willing to think about something larger than ourselves. This is one of the dissonances of our more global world. Many of us are thinking more globally and are very aware of situations in which the world is being and has been flattened. But an enormous part of the population hasn't experienced either flattening or globalization. Because of television and movies, they are very much aware of the distorted and insidiously creeping definition of "personal rights."

While the whole United States might not disintegrate in 2010, I would say we have some serious fractures in our cultural, moral, emotional, psychological and behavioral infrastructures if the response of a 4-year-old is to pull out a shotgun because someone accidentally stepped on his foot.
No comments: