A reflection on why and how and faith

Earlier this week I was at ISTE2018. ISTE stands for the International Society for Technology in Education. There were about 24K attendees from all over the world, quite literally. There were thousands of exhibitors in the Expo Hall at McCormick Place. In addition to hundreds of sessions, there were playgrounds and poster sessions. There were dozens of options for every hour of the day. It can be just too much.

I'd made a decision before this particular ISTE that I was just going to go with the flow. There are lots of people I'd hoped to be able to see but knew that without planning it was going to be impossible. It's the purest of serendipity when you run into people you know at an event the size of ISTE.

I also decided I was going to take a lot of selfies and I wasn't going to get a lot of those tags to add to my name badge. Why? Well, that's the point. The why. 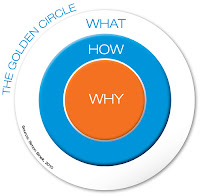 You may be familiar with Simon Sinek's Golden Circle. He did a TED talk in 2009 and published a book, Start With Why, that same year. a while ago and his concept--and book--have shot to the forefront of many folks' thinking.

Why? It's a simple question, one of my favorites. Young children love to ask this question and for good reason: they are trying to understand the world in which they are becoming a part. Sinek reminds us that we each need to start with our "why?"--why do we get up every morning?

My why is actually quite a lot like the example of the young woman in  Chapter 1 of Find Your Why: because I want to help people be and become their best selves, to help others to excellence with excellence.

It occurred to me before this conference that I needed to recharge; I can't help others become their best selves unless I'm able to be my best self. So I worried less about what I wore and who I might see and with whom I might be seen and focused more on what I might learn.

To me, that is part of the how. How do I become my best self? How do I further support my why?

Faith is also part of the how because it fuels my thinking of the possible. Each day is a gift brimming with possibilities. Faith reminds me that God is in control. Faith encourages me because God can guide me as I strive to seek His will to do that to which he has called me. And that brings me back to my why, which is to help others be and become their best selves, to help others to excellence with excellence.

I get impatient, yes, when I feel like I haven't been asked to do something that I believe is a great fit for me. But I can't control what others decide or want, so I continue to seek opportunities that may lie elsewhere. Because that which is the best for me in a given situation to do best what I do best is out there.

I'm happy about the folks I got to see and hug at ISTE. I have small regrets there were some I did not see or get to hug, but I hope they know I love them just the same.

In the mean time, I'll process what I've learned and heard, and all that I've collected because I've still got a lot of reading and thinking and processing to do so. And that is my why right now: to continue to learn and expand my own knowledge and capabilities as well as my circle of professional acquaintances and friends because sometimes others will be the best resource I can offer those with whom I get to work. In the quiet of these hot days, I will read and think and write and learn. That is my how. And I believe with all of my heart that in the days that lie ahead will be possibilities to help others to excellence and with excellence that I cannot imagine.
No comments:

The Demon of Dementia

My mother has dementia. Over the past four years, I have witnessed her slowly slide into a mental oblivion. For a while she was able to put thoughts together and express herself with some coherence. While her recollections were occasionally humorously fantastic, some of her older recollections were spot on. There were times I'd take her out and she'd make comments that made me want to correct her, but I soon realized that she articulated what was in her head and whatever connections made sense to her so I let it be. In fact, there were times I learned more about her as a result of those connections that often made me want to pause and process a bit.

I went to see her a month or so ago. We don't live in the same state and I try to visit her at least every other month although I'm beginning to feel as though I need to try to visit more often. She had obviously declined further, which came as no surprise but that still didn't make it easy to witness. I sat with her while she cleaned the tines of her fork and then spent several minutes attempting to spear a piece of macaroni. She didn't seem frustrated. I found myself getting more and more tense as I tried to appear to be patient and not just reach out to do it for her.

I saw her again just after Mother's Day, a day we didn't really acknowledge in any real sense. I found myself sitting with her at the table again and found myself again clenching my hands in my lap as she fiddled with her food, though part of it was simply trying to figure out how to eat it. Early on the house caregiver picked up the half sandwich and put it in Mom's hand and did the same with another resident. She explained, "Sandwiches are easy to eat once they have it in their hands but they have a hard time remembering how to pick it up and eat it."

One of the other residents has a small dog. I have thoughts about the wisdom of a small dog, even leashed or especially leashed, in a converted duplex with 7 or 8 people most likely using walkers or wheelchairs, but the dog and her owner are there. The dog was whining and begging to come to the table; her mother was talking to her and trying to shush her. My mother turned to me and said, "I want her." I explained the dog already belonged to someone. My mother lifted that eyebrow and said very clearly and in a tone of voice I well remember from days gone by, "You wanna bet?"

So she can't really eat a sandwich by herself, but if she wants something, she can, in fact, put her mind to it. Disturbing, Daunting. Intriguing.

Some months ago I was having a weird headache and my doctor sent me to a neurologist to get an MRI of my brain. The headache thing proved to be nothing of concern (he said he could give me meds but it was hardly worth it and I should report to my doctor if the headaches in that location continued; a few weeks later they were gone). I'd asked about dementia and did tell me there were no indicators in my brain. At that time. He explained a lot about what doctors know about dementia, but also acknowledged there is a lot they just don't know.

Alzheimer's, the most common form of dementia, terrifies me. I'm fascinated by the tests, by the attempts to diagnose sooner. I'm fascinated by what I might do to try to make sure this doesn't happen to me though I also know there are no guarantees.

I have a sense of what might have contributed to my mother's descent into this particular hell of which she is, oddly, not aware. That is the blessing in disguise because I tell people how angry she would be if she knew this was happening to her. She didn't seem to go through the panic of losing her memory but mostly because she was in denial that it was happening; I realized that later. There are dozens of things I would do differently had I know then what I've learned over the past few years. Nothing prepares you for those subtle shifts in behavior so it's easy to be in denial or to delay getting any medical evaluation because you don't want to overreact. However, if I'd known sooner about her situation, I could have made plans differently and less jarringly.

I know that my living situation is very different and it's not likely that I'll repeat her particular scenario. I also know that once I hit 65, all bets may be off but that I can do particular things to try to reduce the risk.

What's interesting is that keeping the brain active and learning is not one of the main factors listed to reduce dementia risk: not smoking (check), drinking in moderation (check), regular exercise (gotta work on that), and healthy diet and weight (more exercise will help with the second of these), stress reduction (exercise will help with this, too), and good restorative sleep (huh; exercise could help with this, too). But I won't stop keeping my brain active and learning just in case researchers change their minds. ;)

I can't tell, though, which is worse: watching her decline and wondering what will happen next or wondering about my own situation. I couldn't remember the word "dustpan" the other day. Never mind I haven't mentioned a dustpan in possibly years, but I freaked a little that I could not remember the word. And then the round and round starts to happen as I do a sort of mental awareness and alertness check. Because wondering what will happen next is the best anyone can do. No one knows enough about this disease and it progresses differently for everyone.

What gets harder is to know how best to handle medical situations. Earlier this year my mother had an infection that required hospitalization followed by time in a rehab facility because of the antibiotic that had to be administered. That little jaunt did nothing good for her liver. When she seemed to have another flare-up of that particular bacteria, the nurse practitioner wanted to put her on a heavy-duty antibiotic that would require home health care and would nothing good for her already battered liver. The infectious disease doctor agreed with me that because my mother wasn't symptomatic, there was no point in stressing her liver and, given her age (88), palliative care made sense. The nurse practitioner was not happy with me, but we're now with hospice palliative care. Mom is visited weekly by a chaplain, a social worker, and a nurse.

At this point in my life, the best I can hope to do is keep her as comfortable as possible, do a better job of taking care of myself, and not let the concern about her or me consume me.