I have a sneaking suspicion that fear of failure is the main reason many people don't succeed. And mostly because they don't even try. Finding that line between a calculated risk and foolishness can be hard for many of us.

There are plenty of self-help gurus who will tell you how to overcome your fears. Easier said than done, my friends. You know that.

Of the list in 5 Ways to Conquer Your Fear of Failure, the last one might be the most relevant to most of us. Or, in the immortal words of the Nike marketing machine, "Just do it." What's the worst that can happen? You'll fail. Sure, you have to calculate the cost and what or how much you can afford to lose, perhaps literally as well as figuratively, but, as they say, "Nothing ventured, nothing gained." 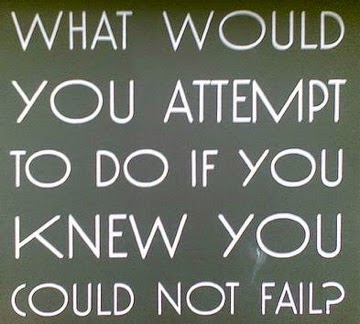 I love the idea that failure is a matter of perspective. Thomas Edison said, "I have not failed. I've just found 10,000 ways that won't work." In fact, in the history of Thomas Edison, failure was one of his best teachers. Failure teaches you to step back and rethink your theory, your process, your approach. Failure teaches you to recalibrate and it just might teach you something remarkably unexpected.

Hemingway reported he rewrote the ending to A Farewell to Arms 39 times before he was satisfied. Perhaps that's not exactly failure, but it reminds us that success takes effort.

Oscar Wilde wrote, "I was working on the proof of one of my poems all the morning, and took out a comma. In the afternoon I put it back again." Getting it right takes time. And yes, details matter.

I told my writing students that writing is hard work, that getting the details right is hard, and that at some point, as a writer, you have to choose to be done even knowing that the moment the work is submitted, you'll think of at least one more thing you wished you'd changed. Fear of failure might mean a manuscript or text never makes it to the editor.

There are many ways to overcome that fear of failure. You've calculated the risk, you've put together your plan, you've figured out your goals and made sure they're reasonably manageable. What next? 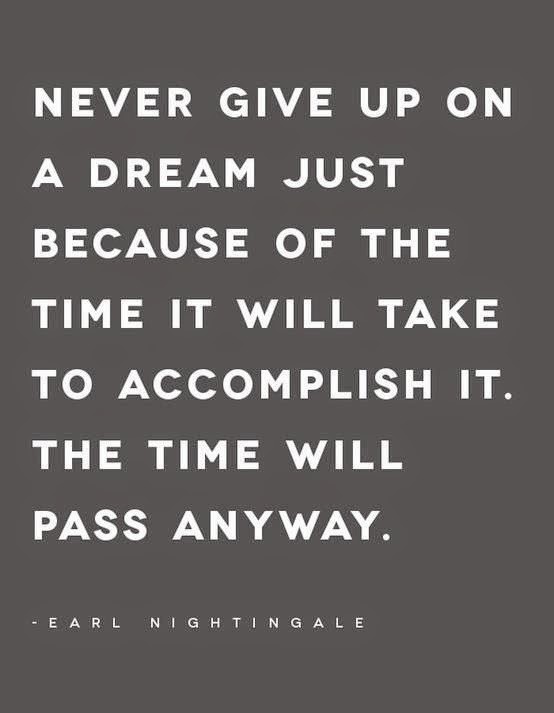 Whether it's a big or small dream, you can't succeed unless you take a chance. "No risk, no reward." All of these sayings have some truth behind them. But the biggest reason most of us choose not to go for it is the fear of failure. We figure maybe we'll try next year or "some time." Well, there's another adage reminding us that "Tomorrow never comes."

Sure it's May 1. Sure you'd planned to start or launch whatever in January, and then in March. No big deal. 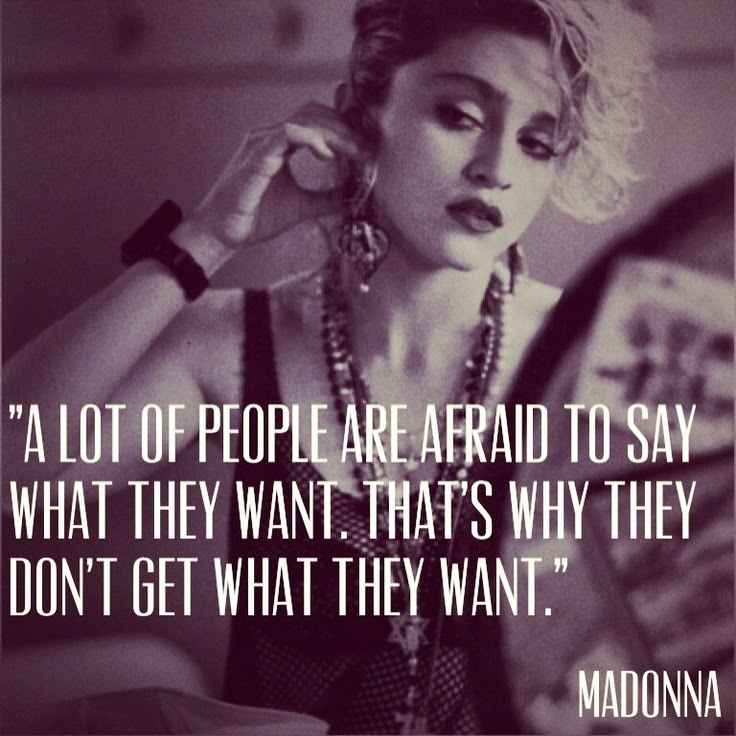 Have a vision.
Know what you want to do or accomplish.
Make a plan.
Go.

Then figure out your threshhold for (financial, emotional, or other) pain.

And may you be successful in it!
No comments:

Savoring a piece of quiet Last week a friend of mine told me the story about how her daughter would say "piece of quiet" because she was too little to recognize the homonyms of "piece" and "peace," so "peace and quiet" didn't quite make sense to her.

I like the idea of a piece of quiet. Especially last week. It was been a chaotic and emotionally taxing week for a number of reasons. I had little time to write the past two weeks or so because much has been in turmoil. When I did have time, because of the turmoil, it was hard to focus so this blog and my other blog, among other things, have been sorely neglected.

Years and years ago I joined a group of folks for a day of prayer. The idea was that we would spend time together, but alone. That is, we each found a place to be as we read, meditated, listened to music, prayed. At the end of the "day" (I think it was a period of about 8 hours), we were supposed to be spiritually and emotionally refreshed. I think I lasted about two hours and then I was done. I wasn't really bored, but the books I had weren't capturing my attention; meditation and prayer were leading to snoozing. Perhaps I didn't have the right mindset for the day, but it's also possible that I hadn't yet learned how to savor a piece of quiet. I certainly had no idea what to do with an abundance of pieces of quiet.

Americans tend not to be very good at relaxation. We know that most Americans do not take all of their vacation time. Apparently most Americans don't vacate the work place as much because of fear as anything else, and that makes sense. People are worried about falling behind in their work so the re-entry is even more exhausting because of all of the work that has piled up. Others are worried they will not be missed and someone will decide that position is no longer necessary. I get that as I was one of those people: afraid to fall behind and afraid I wouldn't be missed. So I was always connected which meant that I got only half a vacation day every day I was gone. Sometimes I did relax and did savor any pieces of quiet I had; other days I was more tense because of whatever was or wasn't happening at the office.

We aren't good at relaxing and that wears on us. Eventually we burn out and we're just not as productive. Working without opportunity to relax sets us up for failure in ways we might not see coming. It's not just entrepreneurs who need to build relaxation into their work flow, but anyone who feels as though their work life is a constant stampede of demands and expectations.

There are ways for the non-entrepreneur to tailor these relaxation tips to their own situations. The key, I think, is flexibility. “The reality is that balance is out of my control. . . .Working hard is inevitable.”

But there is always a sliver of time, even if it's going to the coffee room or to the restroom, when you can stop, or at least muffle, the voices of the madding crowd. Savor that piece of quiet. Think about something fun you did over the weekend or something a loved one said that made you laugh or something fun or engaging or interesting that is not work you hope to do one evening or soon. Or just be thankful for something. Or breathe deeply and focus on a favorite scent or color or place you've been or whatever. Or just breathe deeply and savor that piece of quiet.

No matter how large or small the piece of quiet, savor it and I bet you'll feel the difference.
No comments:

I used to teach The Giver in my Adolescent Literature class. My college students LOVED the book. I distinctly remember a colleague expressing some concerns about the book when her daughter was in the 4th grade and it was on the reading list. I appreciate/d her concerns. It's one of those books that has a particular quantitative reading level but can operate on a much different level for the qualitative and, if you're thinking about text complexity, for the reader and task.

So the trailer for The Giver is out and is going to generate some singular excitement about this film.

Sorry, I lost my head there for a moment. She doesn't have a big part, but who cares? It's Meryl Streep. In fact, the cast is pretty awesome. I would love to think it's because the book is such an amazing book, but we'll have to wait to see how Mr. Weinstein and company treated the text.

What I'm hoping for is a sort of revival of talking about this book, the role of government and the lengths to which some might go to help be sure "the people" don't make wrong decisions. I can't help but think about Divergent and The Hunger Games. Each of the dystopian novels give us a group of people who believe they know what's best for everyone and who let power go to their heads.

Perhaps as our students reflect on what's happening in Ukraine and Crimea, they will think about leadership and power and democracy and why it's important to vote, why it's important for everyone to have a vote, etc. Perhaps they'll engage in conversations about lobbyists, PACS, and SuperPACS and all the millionaires and billionaires who can help buy someone a place in the US government. Maybe they'll even talk about Shirley Jackson's "The Lottery."

Maybe they'll talk about roles and responsibilities in communities and societies.

Maybe they'll think about how they can help implement some changes in their communities. Maybe they'll have conversations about what it means to be tolerant and diverse. The list of possibilities is endless.

When I used the book in my Adolescent Literature class, I invited students to write the chapter after the last chapter in the book. Some of them struggled with that because it seemed to lead not to a tidy conclusion, but to more questions and more possibilities. Exactly.
No comments: