Watching and waiting; waiting and watching

Earlier this week the world and I learned that Pat Summitt has been diagnosed with early dementia, Alzheimer's type.  Since the story broke, there has been a lot of chatter from Lady Vols fans, Coach Summitt admirers, and no doubt some degrees of misplaced glee from the Summitt-haters.  I've read some interesting articles about her since this news broke, including some that seem to be like tributes.  Pat Summitt has had an astonishing career and has made a remarkable impact not only on women's basketball, but on women's sports.

I have my own weird fascination not only because I'm a bigtime Lady Vols fan, but because my stepfather has been diagnosed with early Alzheimer's.  My siblings and I worry about him, but we also worry about my mom, about her state of mind and her condition of mind.  Suddenly, information about dementia, early or otherwise, has become a part of my everyday life.  Suddenly, not only do I need to know more about dementia--all of its types, but I need to understand the symptoms, how to behave around and react to (or not react to), how not to overreact or read subtexts that don't exist.

Suddenly I have to be that much more careful not to make an assumption about a behavior, not to take anything out of context but be sure I have some clarity and understanding of what preceded and what followed, and not to assume something is symptomatic.  I have to take more time to assess and think.  It is not about me, but this will be quite the test of my patience.

Since the news about Pat Summitt broke, cyberspace has been chattering about dementia, celebrities with dementia, how to recognize the symptoms, what to do when one is around a dementia patient, etc.  If it weren't Hurricane Irene pushing her way into the headlines, there might be a lot more stories circulating, which might be encouraging or quite possibly overwhelming.

While my stepdad hails from Tennessee, he's not Pat Summitt.  He doesn't have a team of physicians, a crew of assistants, or 37 years of experience and teams of players to provide support, encouragement, help.  And his behavior won't be scrutinized and analyzed by millions of wannabe sports analysts and the hundreds (thousands?) who earn their livings writing about sports.  He won't have to worry about the sports communities second-guessing or trying to interpret every move, every word, every everything.

If not now, then when?  Check out the Alzheimer's Association.  If you've not already been affected by this devastating disease personally in some way, it's quite possible someone you know has.  Think about doing something to help promote research and dissemination of information.

Watching and waiting for something to change; waiting and watching for signs of change.  Not particularly productive.

Go to the Alzheimer's Association site to learn what you can and need to learn; to find out what you might be able to do to help make a difference.
No comments: 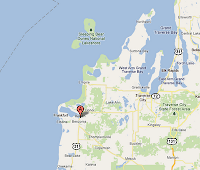 Beulah, MI.  It might not be anywhere on your list of places to go, but you might want to rethink that.  It’s a lovely little town on Crystal Lake near Lake Michigan, about 35 minutes from Traverse City and a short drive or bike ride from Frankfort.  There’s a lovely beach and you can easily access the Betsie Valley Bike Trail.
So much of that area is most definitely Pure Michigan and can make one better appreciate those otherwise annoying commercials with the cloying voiceover.
This was a delightful weeklong getaway.  It was not my intention to be disconnected virtually, but the place I booked had a fairly weak wireless connection which made it difficult, and occasionally impossible, to be connected.  Well, I was on vacation, so I suppose that’s not a bad thing.
Easy, slow mornings with afternoons of bike riding or shopping or hiking or even some combination depending on the length of the bike ride.  One morning started very early because I got to go on a hot air balloon ride!  I can’t begin to tell you how many years I’ve been trying to do this. 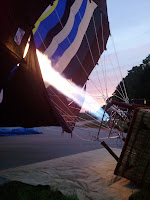 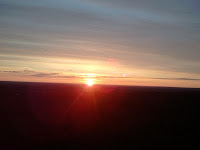 I had a 3:30A ride check, calling in to Grand Traverse Balloons to see if we were a go.  Bundling up and heading out long before the sun started peeking over the horizon.  My friend gamely came with me to help photodocument the event.  She trailed the van as we drove to the launch site and then was able to trail the chase vehicle.  I got to help fill the balloon, until they started with the flames.  Probably best for all concerned.  Once the balloon was filled, the crew held the basket while the 10 of us climbed in and then they let go and we were. . . aloft.  It was so soft with no actual sense of movement as the ground gently fell away from us. 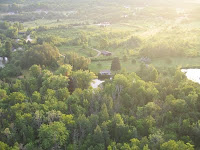 We floated for about an hour.  The best conversation was between the pilot and the chase crew as they decided where we would be able to land.  Before we left, the pilot gave us rules which included not yelling at the people below, refraining from mooing at the cows and barking at the dogs, and staying in the basket until we were told to get out because some folks were friendlier than others when a big ol’ balloon landed on their property.  And then he said something like, “Fortunately, most of ‘em aren’t very good shots.”  Nice.
It was a truly spectacular morning.  For more hot air balloons shots, go here.

The Pure Michigan commercials try to remind you how beautiful Michigan is; how wonderful it is for shopping, relaxing, and playing.
Go on up to Traverse City and park near the tourist information office or anywhere along the bay area.  There are plenty of parking lots, especially near the shopping areas.  Check out the wineries.  My friend and I spent some time at Left Foot Charley’s and had a blast.  We visited Fustini’s and did a tasting of flavored oils and vinegars so we had to go back to pick up all of the kinds we wanted to buy as gifts. 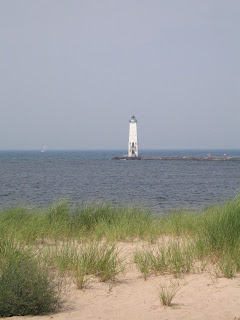 One afternoon we biked along the Traverse Bay coastline to Sutton Bay.  It was a lovely ride though we ditched the bike path because we had road bikes rather than mountain or hybrid bikes.
We found several roadside stands where we could pick up more than our fill of cherries and blueberries.  There really is no such thing as too many blueberries.  Ever.
It’s less about looking up while tooling around Michigan, whether on foot or by car or by bicycle.  It’s more about feeling the muscles in your shoulders and neck start to unknot as you inhale deep breaths of sweet pine-scented air.  It’s remembering what it feels like to sit.  Just sit.  And watch the waves.  It’s enjoying the breeze and the feeling of being disconnected and yet connected to the earth, to your friends, to your self in a very different.  Pure Michigan.  Pure enjoyment.
No comments: