Workplace loyalty. It's not something most of us think about any more. "Job 'tours of duty' growing shorter" caught my attention because I do pay attention to how long someone has been at a job and I wonder about the change.

When I first started working, long, LONG ago, job hopping wasn't frowned upon because there was an understanding people changed jobs every two or three years for a better opportunity. There did seem to be an unwritten rule about how long one had to be with a company before making a leap. And, then, fairly quickly and for reasons I could probably divine if I thought long enough about what was happening economically, politically, and socially, the unwritten rule was rewritten and there was an expectation employees would stick around for a while. Not so much out of loyalty, exactly, but out of a commitment to the work. Or some such nonsense.

Only it wasn't really nonsense. I worked for a large multinational company that seemed to be in the business of acquiring other companies. An acquisition was inevitably followed by a reorg. And sometimes there would be a reorg just because it was spring or fall (reorgs seemed to occur in May and October, and I'm sure there's a reason for that).

Once we all figured out that we were still on the org chart and where we were on the org chart, we'd try to regroup. But for those with a new boss, it was dangerous to regroup too fast because, inevitably, the new boss would have ideas about the way things needed to be done. So energy was dissipated, time was lost, projects fell behind or were abandoned (often at the most inopportune times, like two weeks before launch), etc. Valuable time and energy were spent regrouping and redirecting. It seemed odd that no one figured out that a big dip in profits had to do with all of that reshuffling.

Today people talk about "human capital," which is defined at Investopedia (I kid you not) as


A measure of the economic value of an employee's skill set. This measure builds on the basic production input of labor measure where all labor is thought to be equal. The concept of human capital

recognizes that not all labor is equal and that the quality of employees can be improved by investing in them. The education, experience and abilities of an employee have an economic value for employers and for the economy as a whole.

Right. I'm not sure how that is measured, but it's interesting to me that this term popularized in the 1960s has resurfaced. But it also interests me that many companies recognize the value of bringing in someone from outside of the company to help rejuvenate it.

Veterans laugh when new folks come in and excitedly offer suggestions. They scoff when it was something they used to do "way back when." I remember making a suggestion about a program and someone telling me they'd done that very thing a few years before. When I asked why they stopped, the person was perplexed and told me she had no idea.

If you're still with me, my point is this: for those of us who have the luxury of being able to move to a new or different job (and I recognize there are thousands upon thousands who do not have that luxury), I don't think our loyalty is so much to the work place as it is to the mission and vision of the organization. I think one of the reasons we hang around is that we mostly enjoy the people with whom we work who make the days we don't enjoy more enjoyable. I believe we seek places in which we are comfortable because of our colleagues and places in which we are challenged. And when everything starts to become commonplace, it may be time to try to seek a change.

Because all labor is not equal and the quality of our work lives can be improved when we invest in our work lives, and ourselves.
No comments:

Veterans with poppies as a symbol of remembrance.

It is important that we remember Memorial Day is more than a long weekend, an opportunity for sales, and, weather permitting, cookouts.

General George S. Patton once said, "It is foolish and wrong to mourn the men who died. Rather we should thank God that such men lived."

When you see a veteran today or any day, when you see the parent or family member of someone who serves in the military, thank them for their service and their sacrifice.
No comments:

Tested by a taxi driver

It was spectacularly windy this morning in the Windy City and I was grateful to get a taxi to head to UIC for my presentation about Common Core.

The driver was an amiable fellow and we chatted about his educational plans. He is from Ghana and has a bachelor's degree in finance. He's hoping to get a Master's in MIS because he believes that will offer him better opportunities.

When we got to my destination, I asked for a receipt. He offered me a dozen. I smiled and declined his offer saying "I need only one." He gave me a big smile and handed me two and told me I might need the extra in case I made a mistake.

And then I wished him well on his educational endeavors and said I hoped he was able to achieve his goals. He smiled again and said, "I hoped you would say that. You'd be surprised how many people take as many receipts as I will give them and say nothing to me about our conversation. Too many selfish people. Too many dishonest people."

It was a good "test" and a good reminder, but saddens because being honest and being nice really aren't that hard. Or shouldn't be.
No comments:

I was at the train station in downtown Chicago last week: Ogilvie Transportation for those who need to know. It's a nice train station. About 15 tracks, I think. Trains traveling to and fro the city's suburbs, bringing mostly working folks to the city in the morning. Evidence, perhaps, that the Metra ads to encourage people to take public transportation actually work.

There are ads everywhere. I've seen ads in the shuttle at the airport, so it stands to reason there would be ads in the train station. Designed for commuters and those who are trying to save time and/or money and maybe even help the environment by not driving. 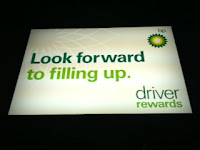 So why, pray tell, were these the ads that greeted passengers as they disembarked from their trains?

Nothing against either company. 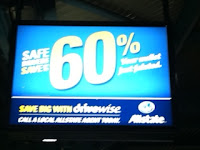