Who will stop the bullying? 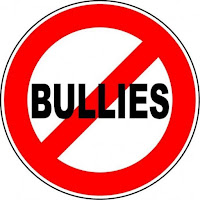 I am troubled by the increasingly nasty rhetoric in our politics. It's been bad for a long time, but this year we have reached a tipping point of being out of control.

Trump will say and do whatever he's going to say and do. I respect the fact that people have chosen him as their candidate and even have a vague understanding of why they may have chosen him. However, I do not respect his bluster or the fact that he can be a bully. I say this as a moderate fiscal Republican and moderate social Democrat.

On the other side of the aisle things are no better. I've read that Clinton PACs will start running Trump ads. I can't wait (she said, her words dripping with sarcasm).

But then there is last weekend's Vegas situation with Senator Sanders. In this case it's pretty clear that what happens in Vegas is not going to stay in Vegas. There may or may not have been violence. The facts have been checked and apparently there was "pushing, shoving, and screaming, a chair was brandished and a great deal of hostile and obscene language used. Several editors and reporters saw and heard the video live and later. People on the ground described it as violence." Is it "violence"? Seems violent to me.

And, apparently, there were death threats made by Sanders supporters against the Nevada party chairwoman, Roberta Lange. Apparently the attendees of that state convention seem to believe that the system is rigged, so they have that in common with Trump and his supporters. I'm not quite sure how Sanders, given his long tenure in American politics, could possibly be surprised by how elections work.

While it is not clear at all if Lange operated completely as she should have, it is clear that some Sanders supporters went completely off the rails and have behaved in truly despicable ways.

We also might know that Sanders has not shown the leadership skills he might have in his defiance and rejection of his supporters' behavior as inappropriate. It may be true that he might not have had all the details when he made his statement, but his truculence is unbecoming.

There have been plenty who have cherry-picked from Sanders' statement, no doubt with their own agendas. Now, according to Sanders' statement, it's possible that the Nevada Convention did not operate completely aboveboard. However, I've not been able to find that Sanders has responded to the fact that his supporters have made death threats against anyone. Doesn't matter who. That behavior is unacceptable. And a leader who cannot or will not call out his own supporters and ask them to moderate their behavior is not much of a leader.

Meanwhile, the DNC and the Democratic Party are having their own moments in the mirror. Is Sanders behaving badly? I think so. Now he sounds like he's whining about how the system isn't fair. Really? In May? When you've been an elected official for how many years?

But I think so much of this is symptomatic of what has become an acceptable level of bullying throughout all of politics. Journalist badger and bully candidates. Candidates bully each other. Candidates' supporters bully the supporters of other candidates. It has all gotten very personal and very ugly.

It has seeped into conversations about everything so people who might be appropriately angry about valid issues become bullies or are bullied regardless of the situation. The rhetoric gets heated, fingers start being jabbed, people are called names, accusations start to fly. It's all ugly and colossally inappropriate.

And played out so everyone--and the kids--can see. We shouldn't be surprised they don't listen to us talking about not being a bully when everywhere they look they see grown-up behaving badly.

It is absurd and stupid and playground bully behavior. I just wonder who among all of our elected officials and candidates, or even among our journalists (though I'm not holding my breath) is going to be the one who can be adult enough to begin the end of the bullying.
No comments:

I'm a sucker for this kind of story: the one about the weird or offensive or wonderful thing that happens between server and diner, especially because of something on the dinner tab. I'm not sure why I like to read them other than to feel good about myself--that there are others who seem to make stupider decisions than I do.

This story of a server-diner brouhaha at Peter Chang in Washington, DC struck me as interesting for a couple of reasons.

First, there's the insolent server. That happens, but why make that kind of sarcastic remark that doesn't seem to be intended to be funny? Especially when you haven't yet gotten your tip.

Second, there is the manager who "apologized and explained the servers were just joking with one another via the POS [point of sale] system. They meant to delete the comments before presenting the check." Making derogatory remarks about patrons of your establishment is "just joking"? And using a company resource to make such comments is somehow okay, too?

Then I managed to raise my eyebrows even more when I read that the manager said "the servers had previously been warned about leaving offensive comments in the system." Really? Just warned? They must be truly astonishingly amazing servers to be permitted just a warning for such unprofessional behavior.

But wait, there was more. The manager went on to say, "They always do that. I've warned them so many times. And they did it again."

Oh, there's more. At the time the story was written he was trying to decide if someone needed to be fired. As a form of punishment, I guess, the manager reduced their hours and will not allow them to work prime weekend shifts. That is some punishment because that will impact their tips.

I was really outraged when the manager said he gave the diners a $20 gift card. Like they'll ever go back to that restaurant.

In my now more settled opinion, the manager should have comped the diners their meal. He should have, at the very least, suspended the servers. They're just going to keep behaving badly until they do something stupid enough to warrant a lawsuit. And the manager? Yikes. If I were the owner of that restaurant, I'd seriously consider the wisdom of having that guy responsible for my reputation.

UPDATE:
A recent update to this story is that the manager and the servers have been or will soon be fired. While I want to be satisfied with that, I can't help but wonder if the situation could have turned out differently had the manager responded differently, had he disciplined the servers differently or if he had fired or suspended them earlier. It's a good lesson for future restaurant managers and for potentially snarky servers everywhere.
No comments: