There's been a lot of media hand-wringing over the phrase "OK Boomer" and what it's supposed to mean and imply. Whatever.

I'm old enough not to be triggered.

Not so long ago a young woman addressing the New Zealand parliament had her moments of viral fame when she responded "OK Boomer" to someone who seemed to express shock about or disagreement with what she said. The person who responded to her speech was identified as a "heckler" by our clickbait-happy media, though on any of the videos whatever the individual said can't be heard. We can only see Chloe Swarbrick raise her hand and say, "OK Boomer."

Is that what happened? Did he "jeer"? Maybe. If what he said was indiscernible, how does the reporter know the colleague "jeered at her age"?

Was that "devastating concision" or just an annoyed "I don't have time for you" response. Other reports differ and I think it's because the media wants to make much ado about nothing much.

I agree with Bob Clark of the Smoky Mountain News who wrote that Boomers just need to settle down. Yes, many of us are not retiring yet. We still feel vibrant and a bit puzzled we're in this age bracket, and many others are like me and enjoy working. I'm still learning and figuring things out. And, while I have some issues with the younger generation, I have a lot of issues too with those still living and doing (and driving!) who are in my parents' generation. 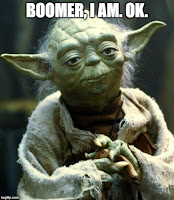 So it has been and so it shall likely always be. Deal with it, people.

It's hard for younger generations to understand why we don't or why we didn't because they can't, won't, or don't comprehend the constraints in which we lived or how very much the world has and hasn't changed in our and their short lives. I have to laugh because, well, when they're our ages, they will understand better just as we began to understand the longer we lived and the more perspective we gained. It is the way things work.

I just read an article about 9 people who prove there should be a different perspective on Boomers, which is also the way of things. We see myopically--from our vantage points of age or youth, from the variances of our experiences and our expectations. Of the nine, five had direct impact on the technology that renders the younger generations the so-called "digital natives." They are the "digital pioneers" without whom there would be no iPhone, no laptop computers or tablets, no internet, no capability for Facebook, Tik Tok, or any other social media app. Sure, those things would likely have been invented eventually, but those five are the ones responsible for the technology world as we know it. What other Boomers have had and have an indelible impact on the world as we know it? For good or for ill? Well, that number might be hard to calculate.

What others also forget is how far and fast the Boomers pushed the technology and its capabilities so the Millennials could do what they do to push it even farther. And it's not as those Boomers aren't still behind some pretty impressive inventions, movements, and development that benefit not only Boomers but make a significant difference in lives of Millennials, Gen X, and Gen Z and whatever labels come after, though most of those don't get the kind of fanfare the latest video game or smartphone get. 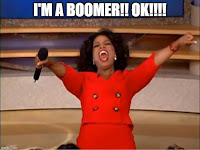 And Millennials have and will have their share of inventions, movements, and development that get little to no attention and yet have significant impact, just as Gen X and Gen Z will. It is the way of things.

I was talking with some Millennials the other day and asked them when they became aware that there was a world bigger than their own community. It was an interesting discussion. I asked, I told them, because I worry about the K-12 students I see who seem to have no creativity and little curiosity about the world. They seem to be most concerned about FOMO and FOLO, especially those who whip out their phones between classes to see what happened to others while they were in class though most everyone they know really should have been in class, too. Those students are among the reasons I don't yet want to retire; why I think, I hope, I still have something to offer.

In January 2019 I wrote about retirement because it is a question often raised to and about us Boomers. Are some of us leaving a mess? Yes, but a lot of us are fighting with those of us who insist there is no mess. Just as Boomers were often at the front of any wave of activism, Boomers often continue to support and often lead the way for change. Why? Well, we know stuff. We've lived with and through stuff. Many of us have experienced aggressions and microaggressions and either put up with it because we had to, or started the landslide of action that fought back.

And we don't trigger easily.

In the mean time, I'm going to get older. There's no way around that. I'm likely going to get more crotchety and less patient with the younger generation. Sheesh, there are times I already sound like my mother's mother and that's more than a little terrifying.