I've never been so tired

Yes, I'm physically tired. Sleep has been elusive for months. Part of that is age and part of that is the time in which we're living. And that's what is really making me so tired.

I've never been so tired of people making excuses for bad behavior and somehow justifying incivility, rudeness, and hate-mongering.

I've never been so tired of people who are willing to believe the worst in others and who are seemingly willing to yield to their worst instincts in behavior and attitude.

I've never been so tired of people who are willing to think someone else is intolerable because they identify in a particular way, and whatever that way is whether it is a political party, a sexual identify, a racial identity, and preference for a type of music. I don't think that last thing has happened yet, but given all that is going on today, it could.

I've never been so tired of people being hateful about someone else because of the color of their skin or the shape of their eyes or what they wear on their heads or because of their accent.

I've never been so tired of people who are unwilling to admit their own mistakes and simply apologize, and apologize like they mean it rather than for a smippet. That's a social media snippet; you're welcome.

I've never been so tired of people who make self-righteous and selective proclamations, such as no voting on Sunday because it is the Lord's day. Well, my friend, every day is the Lord's day and that is true regardless of one's religion. Sunday may be a day of Christian worship, but the Bible calls Christians to pray without ceasing and to worship in spirit and truth which should happen, methinks, every day and not just on Sunday or whatever day your church chooses to gather.

I've never been so tired of Christians who behave in ways that are so incredibly unlike Christ, even though there's not a one of us who could hope to do that well.

For one of my classes students are reading Sartre's No Exit. His most famous line "Hell is other people" comes from that play. For some, it is the most accessible to try to understand what Sartre then believed to be true about existentialism which I have oversimplified, like the cretin I am, to this: You are your choices.

But re-reading the play got me to thinking about the time in which we live and how it is can be to think that yes, hell is being around other people. And that got me to thinking about how The Good Place toyed with the idea of hell being a place in which one is tortured by other people because of who they are and how they behave. But in The Good Place, people overcame who they were and became better people precisely because of the others and their realization that they needed each other.

And that got me thinking about C.S. Lewis's classic The Screwtape Letters and how very, very pleased Screwtape and Wormwood and their ilk must be with how very badly we are behaving and how very easily we are being led, how very willing we are not to be discerning or take any time to think things through or search for ourselves.

However, I've also been thinking a lot about how the pandemic has shaped and continues to shape so much of our thinking and behavior. Would there be this much animosity and vitriol without the pandemic?

And then I pause to wonder if the pandemic has not been some great test of our humanity.

Danger of a Single Lens

You may already be familiar with Chimamanda Ngozi Adichie's TED Talk, The Danger of a Single Story. She explains this danger in a number of ways including the story of an encounter with a young American man who presumed that all Nigerian men were of a particular type based on the reading of her first book, Purple Hibiscus. Adichie replied, though she probably retorted, that having just read American Psycho she was sorry to hear that all young American men are serial killers. The danger of a single story.
Just recently I was reminded of the danger of a single lens.
I was asked to send some information for a "getting to know you" game. I'm not a fan of such games; I never have been. And so, somewhat churlishly, I replied with my answers. There was, however, one question that caused me considerable pause because I realized I really did not know how to answer it because I knew I could not answer it completely honestly.
At first glance, it's a simple question and non-threatening: What did you get in trouble for as a child? 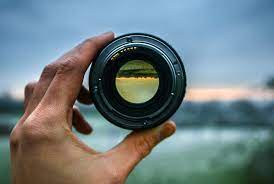 From a certain perspective, it's a completely innocent question. If my childhood had been one with somewhat typical difficulties, it's a simple question. Maybe I got in trouble for stealing cookies from the cookie jar. Or maybe I got in trouble for picking on my sibling. Or maybe I got in trouble for writing my sister's initials on the carpet in chalk and blaming it on her even though she could not yet read or write. Actually, that did happen and it took my mother a few steps away to realize that my sister could not have written her initials on the carpet.  Now that I think of it, I could have shared that one because it did not end as badly as some other things did and most of the time, those are the things that come to mind.
The challenge is that I often seemed to get in trouble for no apparent reason. That's not to say I was a perfect child because I was far from it. But my mother was wicked quick with a wicked backhand and often equally quick with a beating and sometimes it seemed I bore the brunt of her rage simply for walking in the door.
But the game questions reminded me of the times I'd made assumptions about a group of people because of who they are now, because of where we were, because of the type of gathering we were, etc. That list could be long.
We are often surprised when someone doesn't fit whatever we have preconceived or who has a background or experience that seems to be outside of whatever lines we have drawn.
It was simply a subtle but powerful reminder to me that it is dangerous to imagine that even like-minded people have seen or experienced the world in the same way.
It is a reminder of the value and importance of being willing to see the world from someone else's perspective, and realizing that even those we think are like us may actually have a very different set of experience, a very different lens through which they have viewed and experienced the world.
No comments: